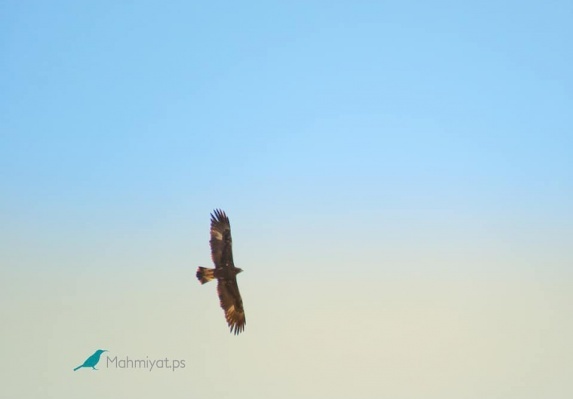 The golden eagle is a very rare resident bird in Palestine.

These eagles are dark brown, with lighter golden-brown plumage on their napes. Immature eagles of this species typically have white on their tails and often have white markings on their wings. Golden eagles use their agility and speed, combined with powerful feet and massive sharp talons, to snatch up a variety of prey including: rock hyrax, rabbits, new born mountain gazelles and birds -such as the chukar. Golden eagles maintain home ranges or territories of large areas. They build large nests in cliffs and other high places such as mountains tops. They can return to these nests for several breeding years. In Palestine, I registered this bird many times in the Fasayil Nature Reserve and in the Jerusalem wilderness. Most breeding activities take place in the spring. Golden eagles are monogamous and may remain together for several years, and sometimes for life. Females lay up to four eggs and then incubate them for six weeks. Typically, one or two young survive to fledge in about three months. These juvenile golden eagles usually attain full independence in the fall, after which they wander widely until establishing a territory for themselves in four to five years.

The story of Aleen

In 2019, I (Saed Shomaly-ornithologist) received a phone call from a villager from Duma in Nablus Governorate. It is located in the northern West Bank, 24 km southeast of Nablus. He told me that he found a large bird sleeping beside the corpse of a poisoned goat which was placed there by people to kill the hyenas that eat cattle. I asked him for pictures of the bird. I identified it and confirmed that it was a golden eagle. I immediately started to take action with a friend of mine from the Ministry of Agriculture (Mr. Riziq Ghyyada) who works with me in nature conservation and raising environmental awareness through projects in Palestine.

First, I informed key people in Palestine from the Environmental Quality Authority, the Environmental Police and Dr. Mazen Qumsiyyeh from the Palestine Museum of Natural History. Then I went with Mr. Ghayyada to Duma village where the villager led us to the eagle between the mountains. We found the eagle there, but it could not open its eyes.

We contacted young men from the village to bring us the medication ATROPINE 0.1%, and  olive oil. We injected the medicine into the chest of the bird (quantity 2.0 cm), and put some olive oil in its mouth. The bird’s condition was very serious, and it could not stand nor open its eyes.

After wrapping the bird in a blanket to keep it warm, we went back to Bethlehem. We arrived an hour and a half after we left Duma village (at 7:00 pm). Next we drove to the museum and placed the bird in a warm room with Dr. Mazen Qumsiyyeh.

The next day the bird looked better, so we started force-feeding it with the help of volunteers from the museum. We fed it 250 grams of fresh liver.

The next day I brought two pigeons and force-fed it again with a little water. On the third day, 2-1- 2020, I found the eagle standing and trying to fly and to escape. So we supplied food for her with the museum manager. The eagle looked at me and seemed to be telling me I should not touch her again, meaning she was now fine.

We decided to release her because she started beating herself into the iron grills and the wall. This was very dangerous. We coordinated for its release in partnership with the Environmental Quality Authority, the Environmental Police, the Duma Village Council, the Nablus Governorate, the Palestine Museum of Natural History and the Mahmiyat Team.

The eagle was finally back in nature, and saying goodbye. But now she has a new name: Aleen.