It is an easy trail through the famous Qana Valley, East of the village of Kafr Thuluth.

The trail started from the East of the village of Kafr Thuluth, about 25 km from the centre of Al-Fariyah (The East slopes of Al-Fariah) overlooking the Wadi Qana Reserve.

This area is considered as a part of the Arab water basin, in which the aquifer water reaches the surface naturally. Its sign appears in the form of pools, torrents, or water benefits along the valley. It also converts certain patches in the form of a bag that narrates the whole forms of life in the region, including animals and plants, and at the end of the slope is Kafr Qara', which the visitor can visit and learn about its leftovers and memorials.

Visitors go east to the centre of the valley, surrounded by natural trees, citrus orchards passing through ancient places and archaeological sites and a wide variety of its landmarks, and may have a break in several stops through the trail near the springs. The visitor continues on an easy path near alhaferra spring seeing domestic animals and grazers around. Visitors stop near Ain Al-Tanour, approximately at the end of the first third of the path. It is a famous spring rich in water, and here some forms of aquatic life and birds can be seen around the pond and its surroundings.

The visitor continues eastward to reach Khirbet Qana, after which the valley is named. In this area, the visitor can imagine the ancient forms of life that inhabited the valley and left their traces in this spot. The walk continues in a zigzagging route, sometimes to the north and sometimes to the south, and in each deviation the visitor passes through, different types of natural trees, wild plants, birds and animals appear, passing through Ain Al-Bassa. From then on, Ain al-Jawza, and the trail ends near the main road, where visitor can leave or head south to visit the village of Deir Istiya. There are 11 springs in the valley but they are under threats to be dry as a result of Israeli aggressions represented by water withdrawing and settlements.

A diversity of plants is found across the valley, including sage, wild thyme, thyme, Arum, lignan and others. Several floras are distributing in the trail such as Pistacia, Arbutus, Calicotome and others. There are many birds in the area, as it is an important passage for them, including the kestrel, moorhen, Squacco Heron, Palestinian sunbird, partridge, eagle, songbirds, blue falcons, common kingfisher, white-breasted kingfisher, and Eurasian Blackcap in the pond areas.

It is possible to see different types of mammals, such as the wild boar, Honey badger, Porcupine, Egyptian Mongoose, the fruit bat, the red fox, and Rock Hyrax. 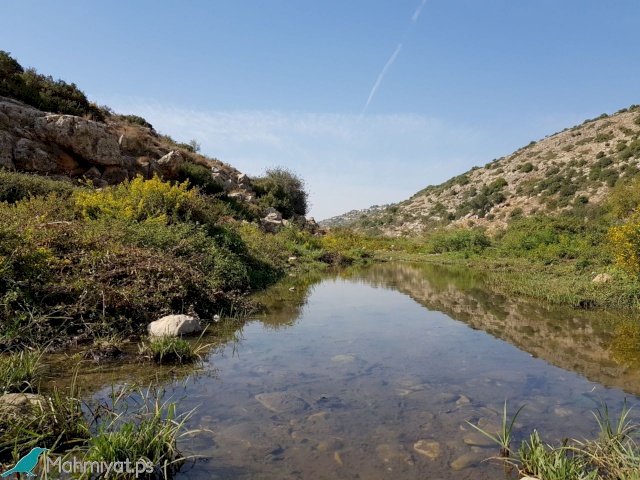