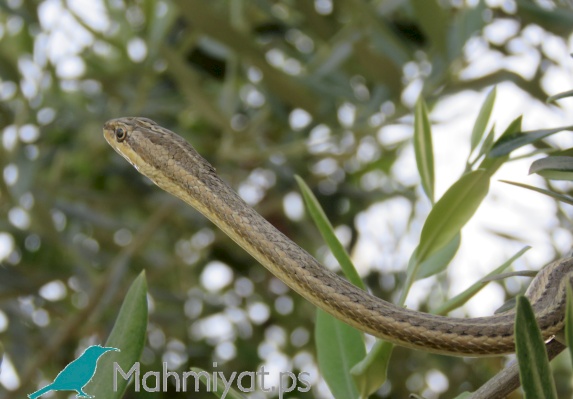 The Schokari Sand Snake belongs to the Colubridae family in the Ophidia (snakes) sub-order of the order Squamata (scaled reptiles). It is one of several back-fanged ("semi-venomous") snake species present in Palestine, reaching a maximum total length (body + tail) of 120 cm. The Schokari Sand Snake is polymorphic (there are different color patterns or "morphs"), appearing in two possible patterns: a dark striped "morph" that is supposedly well camouflaged in areas with relatively dense vegetation; and a light colored "morph" lacking stripes or marked with very light "remnant" stripes that is supposedly well camouflaged in areas with sparse vegetation. Each of the morphs is advantageous under certain conditions of natural background, thus both of them survive in the general population. Differences in the frequencies of each morph are seen between populations living in different areas, and commonly the dark morph is more abundant than the light morph in Mediterranean habitats, while vice versa is seen in desert or semi-desert habitats. Its name is a mispronounced derivative of the Arabic word for "tree" (Shajara), stemming from its amazing tree climbing abilities. It is extremely swift moving. The diet of the Schokari Sand Snake consists of small vertebrates; namely, rodents, lizards and passerine birds. These snakes often wait in ambush on shrubs or trees, pouncing on lizards that pass beneath. It is oviparous (the young hatch from eggs), hatchlings usually appear during late summer and early autumn. Despite its venom, it poses no known threat to humans, and is mostly beneficial to man, by devouring various pests especially rodents. The Schokari Sand Snake inhabits Turkey, the Middle East, and Northern Africa.