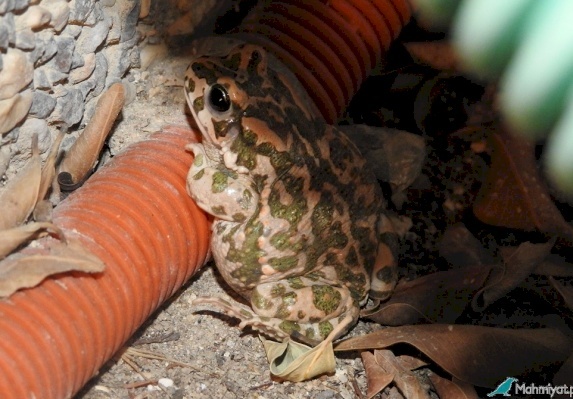 The Variable Green Toad belongs to the Bufonidae family in the Anura (tail-less amphibians) order. It is possible that in the future the populations in Palestine will be assigned to a different species: the African Green Toad, Bufotes boulengeri. It is one of three Anuran amphibians (but the only member of its family) present in Palestine, reaching a maximum total length of 10 cm. The Variable Green Toad spends most of the year (spring, summer and autumn) far from water, in terrestrial habitats; it breeds during winter in temporary water pools. The diet of the Variable Green Toad consists of invertebrates, mainly insects. Little is known about its habits during the terrestrial phase, although it spans most of their lives. We do know they may move around quite a bit during the dry months, several kilometers from the breeding winter pools. Courtship and mating occur in water pools on rainy nights. The males have a characteristic chirping mating call. They embraces the female in what is named "amplexus" (mating hug), spreading his sperm onto the eggs laid by the female while they swim, fertilizing the eggs externally. Tadpoles hatch from these eggs, and metamorphose into toadlets within 6-8 weeks.

The Variable Green Toad is toxic, and excretes toxic mucus from glands on the sides of its head just behind the eyes. The mucus contains the toxin bufotoxin, which deters most potential predators, and is found in most members of the Bufonidae family. Unless licked or otherwise ingested, toads are not dangerous to man. Contrary to common belief they do not spit. They are very beneficial hunters of pests. The Variable Green Toad inhabits Greece, Turkey and parts of the Middle East.