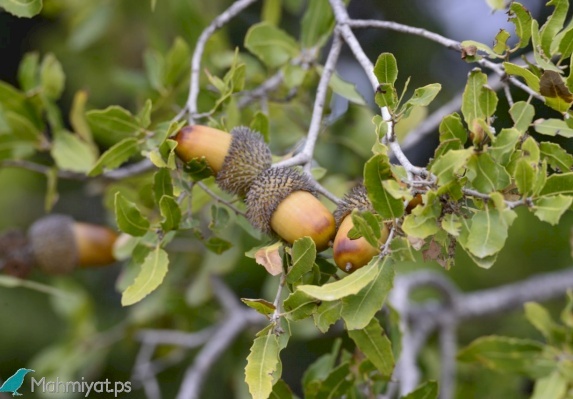 The Palestine oak, which belongs to the Fagaceae family, is the most common tree in Palestine's Mediterranean shrubland. It is an evergreen tree or shrub bearing hard, serrated leaves and small acorns. The flowers are tiny and inconspicuous, and are pollinated by the wind. The shape of the acorns is highly variable among trees; it can be short and round or elongated to a variable extent. The acorns are used as food by rodents and jays, which also help disperse the species. The shape and height of the Palestine oak are also highly variable, depending on local climate conditions and human disturbance. In arid Mediterranean habitats, and where cutting, grazing and fire are common, the oak appears as a short, multi-trunk, often spiny shrub; in wetter climates and under no disturbance, trees can reach as high as 10 meters and bear a single large trunk. Oak individuals that have gained sacred status are common throughout Palestine, are often several hundreds of years old, and bear unusually large trunks. However, the exact age of the trees cannot be measured due to the lack of tree rings in this species. The Palestine oak is common throughout the northeastern part of the Mediterranean Basin. It is a regional variety of the kermes oak (Quercus coccifera), common around the entire Mediterranean. In Palestine, the majority of oak shrublands have been cut down for wood, settlement and agriculture. However, the species is still common and not considered threatened. The red Kermes dye or crimson, used to color fabrics in ancient times, was produced from scale insects (Kermes spp.) that feed on the sap of the Palestine oak