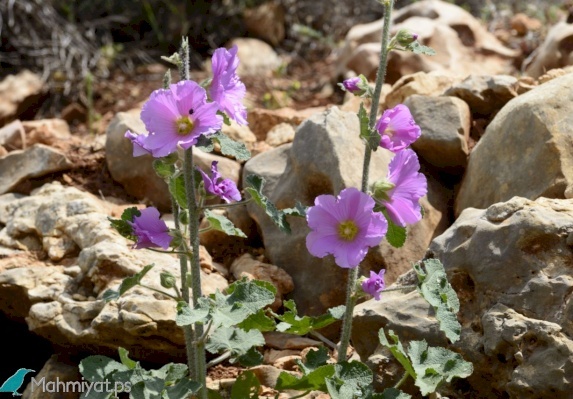 The bristly hollyhock is a tall, perennial herbaceous plant in the mallow family (Malvaceae).

The plant bears a basal rosette of rounded leaves with long petioles (leaf stems), which emerge in winter. In spring, a tall, erect stem emerges, reaching a height of 2-3 meters, and blooming in April-June.

The stem is covered with bristles, which give the species its name. The flowers are pink, very large and showy, with a darkened center, and a large pistil carrying very sticky pollen. They are pollinated by large, long-tongued bees that collect the nectar secreted at the base of the flowers, incidentally touching the pistil and thereby becoming covered with sticky pollen grains.

The fruit, called a schizocarp, contains seeds radially arranged around its centre. During the dry season, the stem remains erect with the fruits and gradually dries out, and the seeds are eventually dispersed by wind and rain. The bristly hollyhock is native to the Levant, ranging from Crete and Turkey to Palestine and Jordan. It has also become naturalized in some European countries.

In Palestine, It is common in the Mediterranean region, and rare in the desert. It grows in open, sunny habitats and on roadsides. The bristly hollyhock is also a very common garden plant, cultivated in a variety of flower colors. The leaves have been used traditionally for the treatment of stomach and intestinal pain, inflammation and asthma. Three additional species of hollyhock (genus Alcea) with erect stems occur in Palestine, but are extremely rare.