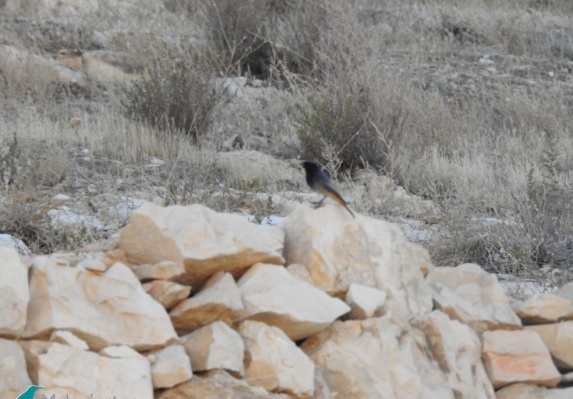 Systematic: The Black Redstart belongs to the Muscicapidae family in the Passeriformes order.

Distribution in Palestine: There are four subspecies – three of them are common passage winter visitors in all parts of the country, while the semirufus subspecies is a rare vagrant.

Habitat: Black Redstart likes buildings, rocky mountain habitats; as well as urban areas. Identification: Upper body parts of the males are grey. Ventral colours vary from grey to red, depending on the different subspecies. Chest and throat are black. In some of the subspecies a white spot appears on the wing. The lower rump and tail are orange-red.

Behavior: The Black Redstart likes to bow, like a spring, by bending its legs. Plus, they like to vibrate their tail, which is conspicuous with its rusty colour.

Breeding: Usually nests in cracks, cracks and holes in rocks; but it also adapted itself to nest in artificial objects such as boxes, metal housings, poles and concrete walls. The female builds a rather sloppy nest and lays 4-6 eggs. The male stays active partner and helps with the rearing; though it doesn't mean it's not mating in the meanwhile with other females. Sometimes the chicks fledge before they learned to fly. The male will take care of them until they grow, while the female starts second and sometimes even third nesting cycle.

Similar species not to confuse with: The common Redstart resembles the Black Redstart and the females in particular, but the orange parts on males Common climb all the way up to the head, and the females are browner then the Black ones.

Cool facts: Black Redstarts first bred in Britain in 1923, but very few pairs were involved until the outbreak of the Second World War, when heavy bombing of London and other towns and cities created potential nesting sites on the empty shell of bomb damaged buildings.