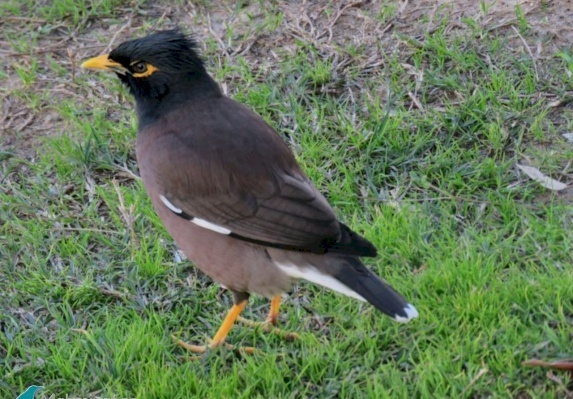 The Common Myna, also known as the Indian Myna, belongs to the Sturnidae (starlings and mynas) family.

The origin of this colorful and vocal Starling is in Southeast Asia. It was introduced to our area and to many other areas around the world as a cage bird that got released and thrived in cities and parks.

The Common Myna is a thrush sized Starling with shiny brown color. Head and tail are black. Yellow bare skin below the eyes gives it a unique look. The bill is strong and yellow. Legs are long and yellow. Tail is short with white outer edge. In flight shows large white patches on the primaries. The young looks duller. Sexes look alike.

Habitat: The Myna likes parks and cities that resemble tropical habitats with high trees and lawns. They are also seen foraging in open woodland and fields with trees.

Distribution and population trends:  The Common Myna is common in Southeast Asia - from the Himalayas to Southern China.  Due to human assistance it has spread to the Arabian Peninsula, Australia, various countries in Europe, the Canary Islands, United States, South Africa and others.

In Palestine: Introduced in the 90's and became common in cities, parks and fields around the towns. They nest in buildings but also use old nests of Woodpeckers. Seen all year round.

Behavior: Forage in small groups. Known to be very keen on safety of its fellow species and in case of danger they gather to help the Myna in trouble. The myna is considered a highly aggressive bird towards other bird species, mammals and even humans.

Similar species not to confuse with: The Vinous breasted Starling has a whiter appearance with buff chest and a dark eye stripe.

Hazards and risks: The Mynas numbers in Palestine and in most other places is on the rise. They are forming a danger for native species that compete with it on the nesting holes such as the Syrian Woodpecker, Great Tit, Scops Owl and Hoopoe. Conservationists are looking for ways to mitigate its problematic influence on the environment and to reduce its population.

Cool facts: The Mynas song is very cool and made from anything it hears around and can imitate. In captivity they can also "talk" if taught long enough.