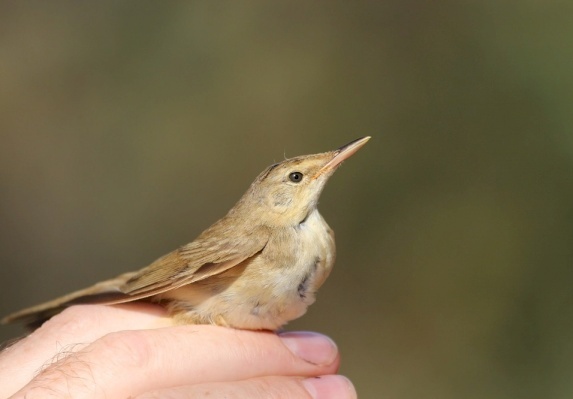 A common reed dweller with brown upperparts and buffy-white underparts. Flat forehead and long thin bill. Rump is slightly redder than back. Very similar to Marsh Warbler, and care is needed to identify it from it. Has complex song of rattles, jittery notes, and whistles.

Distribution: The distribution extends across most of Europe and Western Asia: Britain and Portugal to the west, Scandinavia in the north to the Caspian Sea to the east. There are an estimated 11.5 million individuals in Europe. In addition, there are also nesting populations in the Middle East and North Africa—Turkey, Egypt to the east and Morocco in the west. All known migratory populations winter in Sub-Saharan Africa.

In Palestine: Very common migrant throughout the country in most habitats (even in fields and desert shrubberies), a quite common winterer in the northern and eastern valleys. It breeds along the Jordan River and in reed beds along the Dead Sea and near wetlands around Jenin and the coastal plain.

Habitat: Wetlands and reed beds in winter and summer. Appears in other vegetated habitats on migration. Behavior: Moves low between the reeds usually hidden. It sings from the top of a reed stick or from lower inside the vegetation.

Breeding: The 3–5 eggs are laid in a basket shaped nest in reeds or next to them. The chicks fledge after 10 or 11 days. It may breed 2 to 3 times a year to overcome low survival rate of the chicks.

Similar species not to confuse with: The Marsh warbler is very similar and can hardly be separated in the field. Its head is slightly rounder; the bill is more bluntly ended, color might be greener, legs yellower and habitats sometimes dryer.

Cool facts: The Reed Warbler is often brood parasitized by the Common Cuckoo in Europe in spite of the fact that the Cuckoo's chick is 5 times bigger and heavier than its Reed Warblers foster parents.