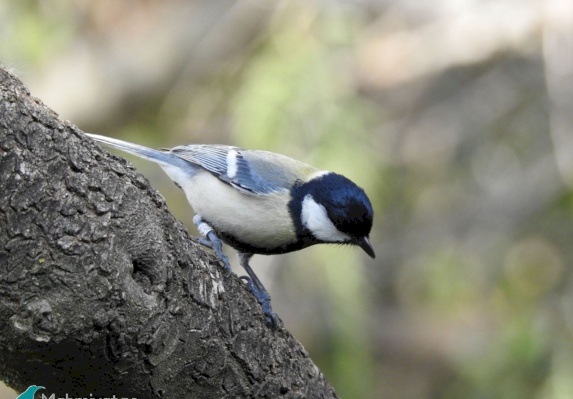 Systematic: (Passeriformes, Paridae) The subspecies found in this area is P.m.terrasanctae

A small, colorful, songbird with a loud metallic song, the Great Tit is one of the prettiest, outstanding birds in urban areas, and in its natural environment, the forest and woods.

Physical characteristics: Length: 13.5-15 cms. Weight: 12-19 grams The Great Tit is easily identified by its colorful plumage. Its lower parts are yellow, and the upper parts are dark; a moss green back, bluish-gray tail and wings, that have a thin white wing bar in the center. A black stripe bisects the chest and abdomen. The white cheeks are framed by a black crown, throat, and nape of the neck.

For the male the bisecting line appears to be a "status symbol", the thicker the line, the more attractive the male is to females. The plumage of the female is similar but not as brightly colored as the male. The yellow bottom is more faded, and the black line is narrower, and sometimes even broken. Juveniles appear more faded than the adults with a yellowish cheek, dark gray crown and throat, greenish-white abdomen with no bisecting line.

Behavior: The diet of the Great Tit is composed of beetles and butterflies, in all their stages, and spiders. In the winter it energetically probes and pries branches, tree bark and among dry leaves in search of insects. It can be seen hanging upside down searching from every angle, but usually doesn't go above 6-7 meters height. Due to the scarcity of insects, seeds and fruit are a larger part of the diet. In the summer, when insects are plentiful, especially among the tree leaves, the Great Tit can be seen foraging even higher than 9 meters. The Sparrowhawk is the major predator of the great tit, in particular, of the fledglings of the second clutch when the Sparrowhawk is busy feeding its own brood. Woodpeckers and small mammals are also known to raid the nest, preying on the nestlings and sometimes on the adults. The flight is undulating, however the Great Tit is more often observed " jumping" from tree to tree.

Habitat: The Great Tit is naturally found in woods and forests, but has adapted very well to the "urban lifestyle". In Sheffield, England, a town of one half of a million inhabitants, 17,000 Great Tits were counted. It is interesting to note that the singing of the Great Tit in a noisy urban area is louder than in the quiet of its natural habitat.

Vocalization: The Great Tit is known to sing all year long, but more so during the breeding season, when the sequences become longer. The Great Tit has large, varied song repertoire, usually tri-syllabic sequences with the third syllable at a higher tone.

Breeding: The Great Tit breeds in woods and forest, as well as in gardens and parks near humans. It will build a nest in hollows in trees, but will adopt other vacant spaces such as nesting boxes, clay urns, post boxes, etc. The subspecies found in this area breeds in the Middle East, in the area ranging from central to north Turkey, through to Syria, Lebanon, Palestine, to north Sinai.

World distribution: The Great Tit is common in all of Europe, central and south Asia. The distribution of the population extended with the increase of cultivated fields and settlements (de Hoyo et al., 2007) however its European population has decreased slightly in the past decades (Birdlife International 2012). Research has shown that global warming has caused a lack of available food for the nestlings, resulting in decreased reproduction rates in Europe (Visser et al. 2006). Common in Palestine in wooded habitats and cities and villages.