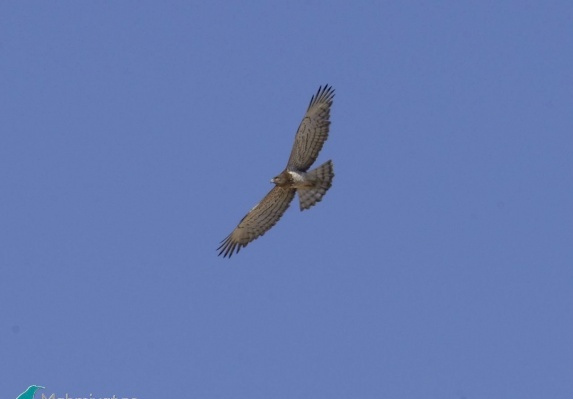 Physical characteristics:Length: 62-70 cm. Weight: 1,225-1,850 grams The short-toed Eagle is a large, light colored eagle known to specialize in eating snakes. All the underparts of the bird are light colored, with thin brown bars. In flight the light coloring of his body and underwings makes it almost invisible on the background of the sky, and enables it to surprise its prey with a "dive" from great heights. The wings are long and wide, rectangular. While gliding, the "hand" is closed forming a somewhat pointed wingtip, compared to other eagles, and the wing is bent forward. The tail is narrow, long, squared off and has brown bars. The head and neck are usually, but not necessarily, brown. The upper part of the body is dark brown.

The Short-toed Eagle has excellent eyesight: its large yellow eyes, that are placed towards the front of the round, wide head, give it an owlish appearance. The comparatively short, calloused toes are well designed for holding slippery snakes and killing them. Although it is not known to be insensitive to snakes venom, there have been no known cases of injury from snake bites to short-toed eagles. However, birds have been found strangled to death by a large snake wrapped around their body. The short-toed eagle is also threatened by electrocution from electrical wiring, and the theft of eggs from the nest.

Behavior: One of the most common raptors in this area, the Short-toed Eagle was spared much of the decimation that other raptors endured from poisoning due to its diet principally of reptiles. The Short-toed Eagle hunts while soaring over the area, while hovering in one spot, and from high vantage points such as trees. Towards the end of the nesting season dozens of the Short-toed Eagles are known to flock in areas rich in food such as freshly plowed fields where the snakes and rodents are uncovered.

Breeding: The Short-toed Eagle has a courting behavior which consists of a slow majestic flight, with wings spread and slightly raised. The wings of the male will almost touch those of the female. The couple will let out loud cries. The Short-toed Eagle breeds in the Mediterranean area, usually building a nest in trees, and laying one egg. The nest (built only one-two meters above the ground) is made of branches and twigs, and lined with fresh leaves and twigs. Only one egg is laid. The young grow quickly on a diet of small snakes. The next spring the fledgling will return to his parents' area and will be allowed to "hang around" until the new egg hatches.

World distribution: The Short-toed Eagle can be found in the area ranging from southern and eastern Europe, the Middle East through to India and central Asia. It winters in northern Africa. In Palestine it is a common breeder and a very common passage migrant. Rare in winter