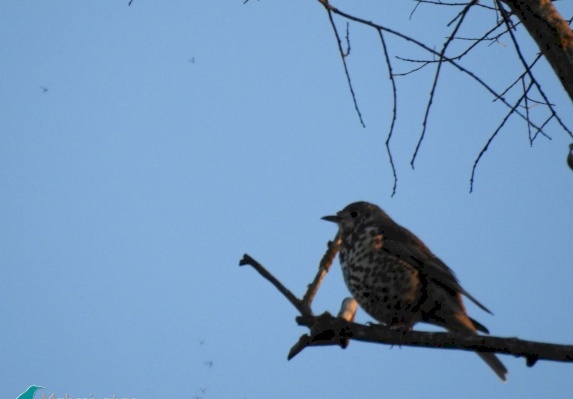 The song Thrush is a skulking bird of thick hedges, trees and forest.

Systematic: The Song Thrush belongs to the turdidae family in the Passeriformes order.

Distribution: Europe and western Asia. It's An invasive species in New Zealand and Australia. In Palestine: A common passage migrant and winter visitor. Arrives at late October, and usually leaves by the end of late March. Smaller numbers appear in the desert region, especially in towns and agricultural areas. Very rare in summer.

Habitat: It likes shady forests with well-developed sub-forest, parks and gardens. Identification: Long winged, top parts are pale greyish-brown and densely speckled at the bottom parts. Shades of sandy background often occur at the sides of the chest and body. The under-wing coverts are distinguished with orange hue. They have a typical flying call – thin and fairly weak "tzip". Winter males sing from tree--tops melodic and beautiful singing. Fed cows, insects, worms, etc., often on the ground.

Behaviour: Song thrush is very similar to the Blackbird in its behaviour. It flies quickly from shelter to shelter, and keeps a low profile. Relies mostly on invertebrates it catches on the ground. It has also developed a talent for cracking snails on stones.

Breeding: The female Song Thrush builds a cup-shaped nest lined with mud and dry grass in a bush, tree or creeper; though it doesn't breed in Palestine.

Dangers and threats: In many European countries there were large declines in population, mainly due to changes in the agricultural structure, and it is listed on the red list of countries such as England and the Netherlands.

Similar species not to confuse with: Mistle Thrush resembles Song thrush; they both have brown backs and speckled breasts, but the Mistle Thrush has paler outer edges to its tail with white underwing, and the spots on its belly are more rounded.

Cool facts: The Song Thrushes were first introduced to New Zealand in 1862, in order to give the island a "British ambience", and since then it spread to the state of being one of the commonest birds there.