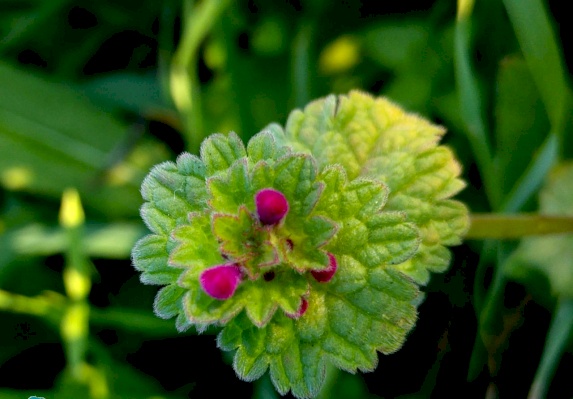 Henbit Dead-nettle is annual plant belongs to the Lamiaceae in the Lamiales order. It is a species of Lamium native to Europe, Asia and northern Africa. leaves are arranged in opposite pairs. The lower leaf pairs are farther apart from each other than the upper leaf pairs. Leaves are round or heart-shaped and leaf margins have rounded teeth. Veins of the upper leaf surface are recessed, giving it a somewhat wrinkled look. Lower leaves grow on short stalks, and upper leaves clasp the stem. The green or reddish brown stems, purplish basally, greenish above are 4-angled, nearly glabrous, and up to 10-25 cm tall. They have a tendency to sprawl across the ground, although the new growth of the stems is more erect. The flowers are relatively large and form a few-flowered terminal spike with axillary whorls, tiny, dark pink or Crimson flowers occur in rings in the upper leaf axils. Open flowers are somewhat orchid-like, with a white face and dark red spots. Each flower produces a four-seeded fruit. Flowers, Some plants are self-pollinated and have small flowers that do not open, the flowering period from December until April. The fruits are comprised of four nutlets contained in a tube-like structure, The seeds or nutlets are brown, tiny, and triangular in cross-section and have a rounded to squared tip and a long tapering base.

Ecology: The best habitats for this plant is the Open places in managed forests, agronomic and vegetable crop fields, orchards, vineyards, gardens, lawns, landscaped areas, fields, pastures, roadsides and other disturbed, unmanaged areas. This plant has no spiny parts ,it is not succulent , and glycophyte in terms of salt resistance , The Henbit Dead-nettle follows the euro-Siberian - Med – Irano-Turanian chorotype. The nectar and pollen of the early blooming flowers attract long-tongued bees primarily, including honeybees and bumblebees. The foliage is eaten by voles and turtles. Medicinal and other uses: Henbit can be consumed fresh or cooked as an edible herb, and it can be used in teas. The stem, flowers, and leaves are edible. Henbit is very nutritious, high in iron and vitamins. According to Natural Medicinal Herbs (dot net) this plant is anti-rheumatic, diaphoretic, an excitant, febrifuge, a laxative and a stimulant.

Cool facts: Unlike many of its relatives, henbit does not have a strong or distinctive odor.