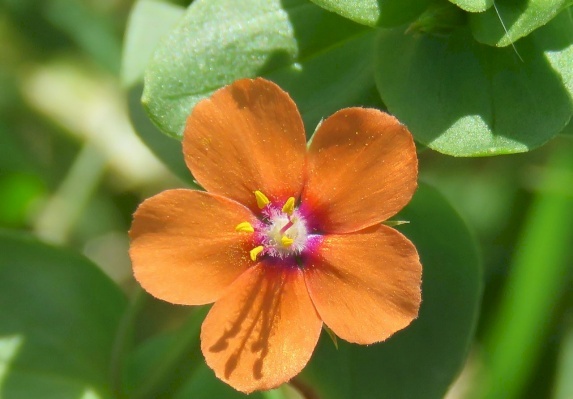 It is annual plant belongs to the Primulaceae family. It is native to Europe, Western Asia, and North Africa. Leaf arrangement is opposite where two leaves per node, leaf type is entire, and the leaflet is smooth, leaves are bright green, soft, and ovate sessile. It has weak sprawling fleshy stems with square cross-section growing to about 5–30 centimeters long. The orange, red or blue, radially symmetric flowers are produced singly in the leaf axils from spring to autumn. Flowers are hermaphrodite only ,they attract a variety of pollinators, especially flies, but also capable of Autopollination. A purple spot often appears in the center of the flower. The Scarlet Pimpernel has a wide variety of flower colors. The petals of the type arvensis are bright red to minium-coloured; carnea is deep peach, lilacina is lilac; pallida is white; and azurea is blue. Fruits are round 5 ridged lid-capsule; capsules opposite, quite prolific along the stems , It has homogeneous seeds-fruits , the seeds are transported by the wind or rain.

Ecology: The Scarlet Pimpernel grows on the roadside in waste places and on the dry sandy edges of corn and other fields , this species is an indicator of the light soils, it is common and widely distributed in Palestine. The summer annual has a low-growing creeping habit, but as a winter annual, it forms a half-rosette with an upright stem. It is glycophyte in terms of salt salinity, it has no spiny or succulent parts. It follows the phytological zone the Euro-Siberian - Med - Irano-Turanian.

Similar species: The blue form can be difficult to distinguish from A. foemina, but the petal margins are diagnostic whereas foemina has clearly irregular petal margins with only 5 to 15 glandular hairs, A. arvensis f. azurea has 50 to 70 hairs on only slightly irregular margins.

Herb uses: Anagallis arvensis is less often used in folk medicine worldwide, it has been used in treatment of phthisis of non-specified types, and of kidney-related conditions such as dropsy and chronic nephritis. It is harmfully toxic in several respects and accordingly undesirable in pastures. Perhaps fortunately, the plant is acrid and bitter, and grazing livestock generally avoid eating it. It is insecticidal, or at least is repellent to some insects, possibly by virtue of its pungent essential oil which has a characteristic smell.

Cool facts: Scarlet pimpernel flowers open only when the sun shines, and even close in overcast conditions and threatens rain. The summer annual species is creeping while the winter one is with upright stem.