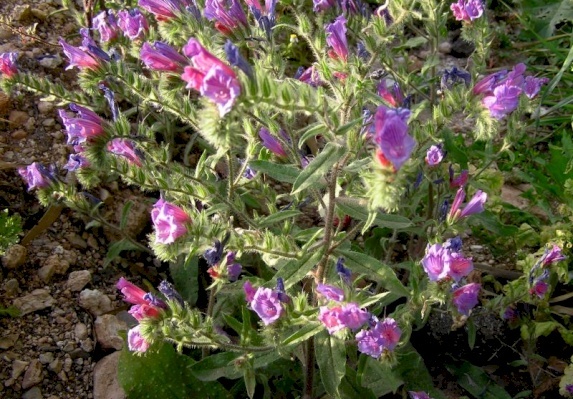 The genus Echium comprises around 65 plant species that are distributed in Europe, Middle East and the Mediterranean area. Echium judaeum is known as Judean Viper's-bugloss that belongs to the botanical family Boraginaceae. This species is common in almost the entire Palestine and wider area. Judean Viper's-bugloss is found in Mediterranean Woodlands and shrub lands, shrub-steppes, deserts and extreme deserts.

Echium judaeum is an annual plant, blooming from March to April, which stem is hairy, erect, branching at the top and whose the leaves are alternate and entire. The inflorescence is composed of many simple clusters of several flowers. The flowers are violet-blue and the fruit pods look like a nut.

In general, Echium species produce a large amount of nectar, rewarding bees, especially honey, when they forage for pollen and nectar. In addition, some butterflies larvae, such Coleophora onosmella, feed on the leaves of Echium species. Other species can be used for producing skin cosmetics, such the seed oil of Echium plantagineum. Furthermore, several species of Echium are used as ornamental garden plants. Some species, however, have become invasive in southern Africa, California and Australia, which may be a threat to native species. For example, Echium plantagineum, has become a major invasive species in Australia.