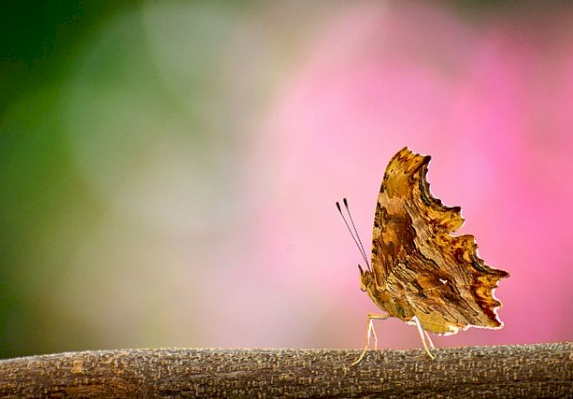 This small member of the Nymphalidae family is common in the south of Europe, the Mediterranean area, to Iran and east to India. This species is found in hot, dry rocky areas including steep hillsides, gorges, archaeological ruins, and rural habitats, most commonly at altitudes between sea level and about 1000m although it has been recorded as high as 1700m in the Atlas mountains. They are known to inhabit mountainous area but have ventured into the desert as well. The butterfly is often observed in cities near walls where it hostplant known as stickweed or spreading pellitory (Parietaria judaica) grows. It has a characteristic flight which is a combination of gliding and fluttering. The males are territorial and will perch on rocks or walls from which they are on the lookout for invaders to repel.

They appear in April and bring up 2-3 consecutive generations until October-November.

There is some doubt as to whether this species produces 2 or 3 broods a year, and it is possible that it has a complex lifecycle , in which some larvae develop quickly while others develop very slowly, creating a staggered emergence. Most sightings of fresh adults take place in June or September-October. Adults flying in October enter into hibernation at the end of the month, and awaken in February or March of the following year.

The Southern comma are a small member (wingspan 19-27 mm) of a genus instantly recognisable by their characteristic ragged wing shape. Most of them share a similar upper side pattern of blackish spots on a golden-brown ground colour. On the undersides they are cryptically marked to resemble dead leaves or tree bark, and have a central white or silvery mark on the hindwing in the shape of a chevron.

After-hibernation the adult females lay their eggs singly on the leaves of upright pellitory, or lichwort (Parietaria officinalis). They are green, 0.75 mm with 11 "ribs". The larva grows from 2 mm in length to 33 mm.as it develops into a brown caterpillar with white spots on the sides and yellow bristles

The chrysalis is typical of the Nymphalinae, cryptic in color but with a subtle metallic sheen, and 20 mm in length. It has a double row of short spikes along the back, and a thoracic keel. It is suspended  beneath a rock or boulder, or within the crevice of an old wall.