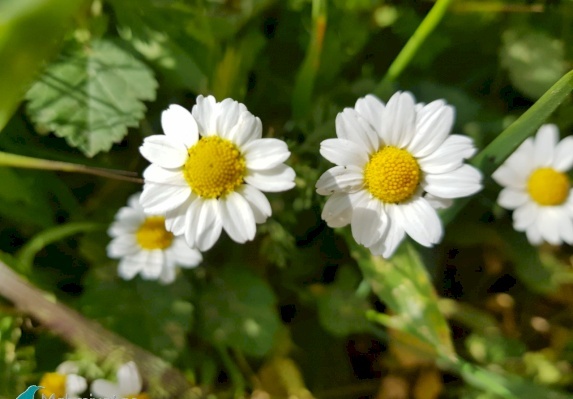 The species of this genus are distributed mostly in the Mediterranean area. The natural flavonoids and essential oils of flowers of Anthemis are largely used as healing herbs and antiseptic.

In Europe, the extracts, teas and salves are popularly used as antibacterial, antispasmodic and sedative agents, also against pain and for cleaning wounds, to treat cystitis and dental problems, as well as for therapy against irradiated skin injuries. Anthemis pseudocotula is a commonly known herbaceous plant species, whose common name is Chamomile. Belonging to the family Asteraceae, this species is native to the East Mediterranean region and ranges to Saudi Arabia, Iraq and Iran. It is found in shrub steppes and deserts habitats, Mediterranean woodlands and is commonly distributed in most parts of Palestine and wider area.

This plant is among the most widely distributed plant species of the genus Anthemis. Several plant species from the family Asteraceae have the word “chamomile” included in their common names.

However, this does not mean they are the same species used for herbal tea known as "chamomile." Plants of the family Asteraceae, which include the common name "chamomile are, for example, Anthemis arvensis, Anthemis cotula, Matricaria discoidea and Anthemis pseudocotula. Nevertheless, one main use of A. pseudocotula is its great anticorrosion effects on steel. Anthemis pseudocotula is an annual plant, whose stems are 15 to 50 cm high, much branched, erect or ascending and pubescent. The leaves have bright dark green, are alternate, ovate/oblong.

The flowers are composite, 2 cm wide, with a yellow disc in the centre and white ray of female (which often are fertile) flowers around the disc. The fruits are up to 1.5 mm long and form pods. Anthemis pseudocotula is blooming from March to May in East Mediterranean area, whilst it blooms from around April to August, in Europe.