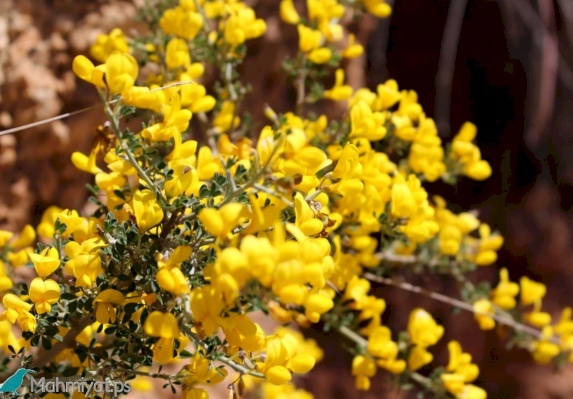 Calicotome spinosa This plant species is a very spiny shrub from the family Fabaceae. Hence its English common name spiny broom or thorny broom. Calicotome spinosa is native and distributed in the western Mediterranean region, including northern Libya, northern Algeria, Palestine and wider area, Italy, France and Spain. However, nowadays spiny broom has been cultivated as hedging and garden plant in southern Australia. It grows on sunny slopes and dry, rocky ground or near the coast. It is also common especially in areas after woodland clearance. Spiny broom is a perennial deciduous shrub usually growing 1.5-2.5 m high, but occasionally reaching up to 3 m. The stems are much branched and have many, sharp, rigid spines reaching up to 75 mm long. The trifoliate, sparsely hairy leaves have three dark green leaflets, which are elliptic in shape and the middle leaflet that is slightly larger than the others (about 6-12 mm long). The plant produces several flowers, which are hermaphrodite, bright yellow, pea-shaped, measuring 12-25 mm long and are pollinated by insects. The flowers are single or in small clusters near the ends of the branches. The flowering time is from May to July. The fruit is a smooth, flattened pod (up to 40 mm long). These pods are hairless, grey, black, or dark reddish-brown in colour. They are oblong to elongated in shape and contain 3-15 rounded, brown, shiny seeds. Calicotome spinosa has a symbiotic relationship with soil bacteria, so it can fix nitrogen. Part of the nitrogen is used by the growing plant itself, but the other part may be used by other nearby plants. However, this nitrogen fixation can change nutrient levels in the soil. Further interestingly is that in ancient times the flowers were used in Palestine (10th century) to flavour sesame oil. Today, the florets are still used by Bedouins to flavour butter.