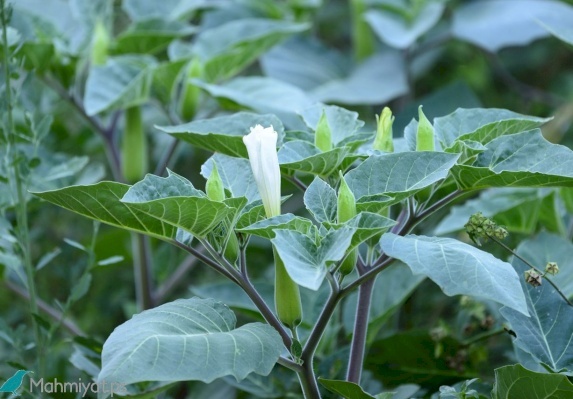 Datura anoxia is annual plant, the stem is semi-woody. The leaves are alternate and entire. Flowers are white, usually solitary and tubular. Flowering periods: June, July, August, September, October, November. Fruits are capsule, ovoid, yellowish-brown seeds, flat, kidney-shaped. All species of Datura have been used by native peoples of the Southwestern US in puberty and other ceremonies, because of their hallucinogenic alkaloids and have caused poisoning and death in humans and animals. It is known as 'loco weed' because of its effect on cattle.

It is invasive species thrive in the cultivated areas, disturbed habitats and roadsides. It belongs to Pluriregional chorotype. Datura belongs to the tomato family (Solanaceae) with a confused taxonomy and disputed origin because of their extensive naturalization through temperate and tropical regions world-wide. Depending on the conditions a plant is growing under, the size of the plant, leaves and flowers can range from very large to very small – which has led to many new species. All Datura plants contain a number of alkaloids, especially in the seeds and flowers, that are toxic, narcotic and hallucinogenic. The toxicity depends on the age of the plant and growing conditions, with serious illness or death a possibility from ingestion. They are also poisonous to cattle, horses and sheep.

All parts of Datura are poisonous and contain Atropine, hyoscine, and hyoscyamine. It was used as a painkiller in certain initiation ceremonies and given as a narcotic to the ceremonious sacrifices. For this purpose, the preferred method of administration was either by enema or as a rolled-up leaf suppository, which reduces some of the less pleasant side effects of the drug.