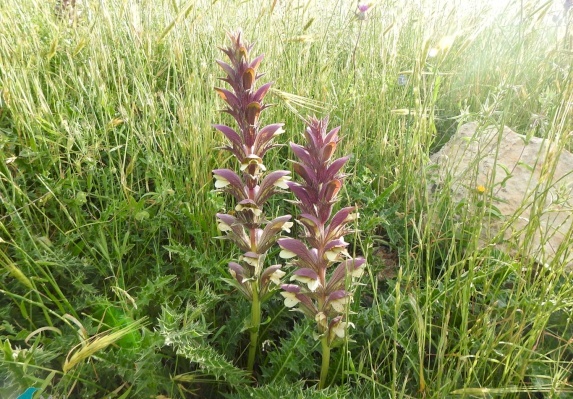 Acanthus syriacus is Hemicryptophyte, a perennial plant having its overwintering buds located at the soil surface commonly known as Syrian bear's breech, it belongs to Acanthaceae family. The leaves are Opposite, rosette, dissected, pinnate, dentate or serrate, spinescent. Leaves are divided into lobed and pointed leaves. Flower spikes bearing greenish-white or purplish flowers, Purple in Spring; Purple, Greenish-white in Summer and the flowering periods ranges from March to May. These plants are distributed widely across the Mediterranean and tropical regions of the world.

It grows in several habitats such as garrigue and Batha (or phrygana), soft-leaved scrubland, it belongs to the Mediterranean chorotype.

Acanthus syriacus is one of the endemic species that has been used as a folk medicine for its immunomodulatory properties and against various neurological disorders. This striking ornamental plant has traditional medicinal applications, historically it was used for burns and dislocated joints. The major constituents of various Acanthus species were determined to be alkaloids, flavonoids, glycosides, saponins, and lignans. Acanthus species have been used in Asian traditional medicine for amelioration of various ailments. Various Acanthus species have shown anti-hepatotoxic, antioxidant, antimicrobial, antitumor, antiviral, anti-inflammatory, analgesic, and anti-fertility activities.