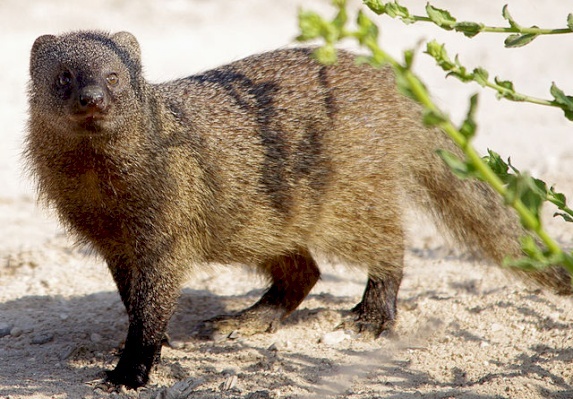 The Egyptian mongoose belongs to the herpestidae family in the carnivora order. It is a medium size predator with a brown-grey color, dark legs and tail-end and small ears. Its pointy nose is different than the beech marten or other mammals can be found in the area. The Egyptian mongoose is quick and fast, moves mostly on the ground and is seen usually (but not always) close to water sources, and can be seen also near extensive human presence. It is well known by its immunity to snakes' venom and its diet is based on reptiles but also on small mammals, fish, birds and large invertebrates. One of not so many diurnal (day active) mammals, the Egyptian mongoose is very common to see, a fact that got it under threat in some time periods along the years. In times when the population was under threat and was poisoned, higher frequency of snake bites was noticed, especially of vipers, and the mongoose is one of the major natural tools to control venomous snakes. It is common to see one or two females taking care of a group of young members of the group. The Egyptian mongoose is found mostly in sub-Saharan Africa and along the Nile northwards to Sinai Peninsula,Palestine, Syria and turkey and also along the western coast of Africa up to Spain and Portugal (maybe introduced). It is found in our region all around the Mediterranean areas and near human settlements and permanent water sources in the eastern rift valley and the Dead Sea region.