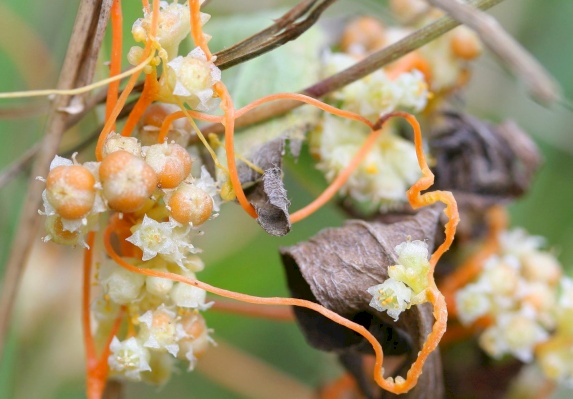 This is an annual parasitic plant species from the family Convolvulaceae, whose English common name is field dodder or golden dodder. Cuscuta campestris is native to North America, but has become naturalised in temperate and subtropical regions and least abundant in the tropics of Central America, Africa, South-East Asia and the Pacific Ocean.

Cuscuta campestris is distributed in some parts of Palestine, but rare to very rare in most of Palestine wider area.

This plant parasites a large number of herbaceous plants, such several legumes. Furthermore, it grows in habitats like steppes, the Mediterranean woodlands and shrublands, deserts and extreme deserts, as well as in disturbed habitats.

The field dodder lacks normal roots and leaves, but does have flowers and fruits. It has thin and much branched yellow/orange stems, reaching from 0.2 to 0.4 mm diameter, with tendrils in the place of leaves. The tendrils form coils and haustoria, which is a specialised root-like sucker that penetrates a host plant to suck nutrients and water from it. The flowers are white/greenish, with bell shaped corolla 2 to 2.5 mm long. Both calix and corolla have five lobes.

Field dodder flowers for a long period, from May to December, producing dense clusters of 3-8 aggregated flowers in a cymose inflorescence.

The fruits are up to 4 mm diameter capsules, with 4 dark coloured seeds. C. campestris seeds are mainly dispersed by wind, water and birds. Additionally, the seeds may be also dispersed by accidentally machines and planting material contaminated by the seeds, since they can remain viable for more than 3 years.

Cuscuta campestris can be a serious weed causing damages in crops and in native plants by absorbing food material from the host plant. Besides that, the net of stems produced by field dodder can cause shading of the ground vegetation layer. Therefor this plant has been listed as prohibited plant species that must be controlled in South Africa, Hawaii and most Australian states.