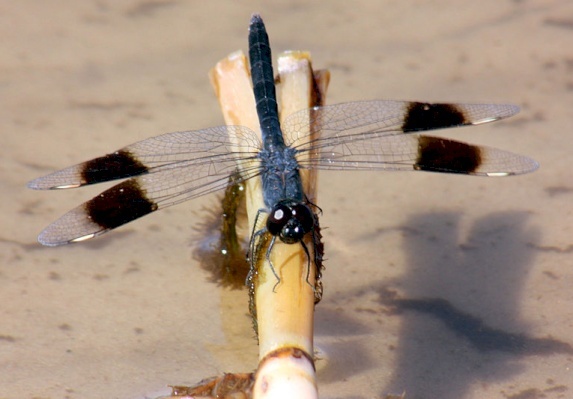 This insect is a common species of dragonfly, known as banded groundling (order Odonata; family Libellulidae) and is widely distributed in Africa, western Asia and southern countries of Europe. Banded groundling is native in several countries, including Palestine. In general, dragonflies are associated with freshwater ecosystems and are particularly good indicators of water health as they rely on the quality of the water and surrounding habitat to persist. Furthermore, dragonflies have an aquatic larval stage that can last up to one year and a terrestrial adult phase. Males Brachythemis leucosticta are territorial and this behaviour is also found in many other dragonflies species.

Typically, every dragonfly holds their wings at right angles to their bodies and the large compound eyes are, in most of species, joined together at the top of the head. That turns easy to recognize a dragonfly in the field. Male of B. leucosticta is very easy to identify in nature, due to its dark brown wing bands and all-charcoal head, thorax and abdomen. These wing bands are absent in female. However, for female the pterostigma on the edges of the wings is bicoloured: yellowish in the centre and dark brown towards the edges. Their body is 29–31 mm and hindwing is 23.5–25 mm long. The banded groundling flies from November to May and lives in heavily grazed savanna near pools, dry habitats, dams and borders of sluggish rivers. Thus, male and female typically perch on bare ground near water.

An especially interesting feature of these insects is the accompanying behaviour, where male and female of B. leucosticta follow large mammals and even human observers, flying close to the ground for capturing the small insects that are disturbed by the big animals. Small clouds of little insects are formed when the big animals move, resulting in a great source of food for the dragonflies, especially those who live in a hot and vegetation sparse area, where flying insects are not likely to move much during the day.