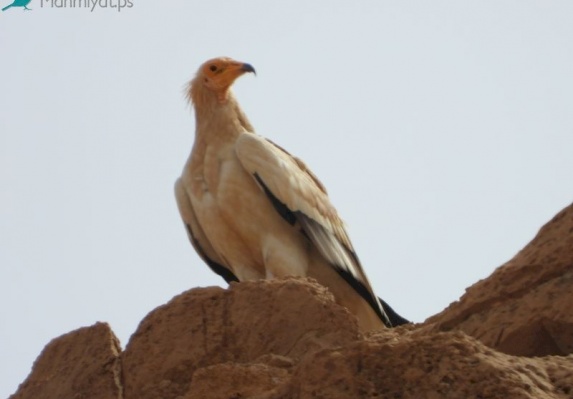 Description: A medium to large vulture that has a characteristic silhouette with its large wedge shaped tail. It has a very similar colour pattern to a flying white stork with its black and white plumage.

The body, head, tail and coverts are white. The head, neck and breast and mantle of the adult bird are tinged with varying degrees of brown feathers. The bare parts and cere of the adult birds are yellow. The adult Egyptian vulture has a white body and head with the black section of the upper wing containing white centres which is unique feature.

Juvenile birds start off their years as an all brown bird with bluish bare face patch and cere. It takes five years to reach adulthood, gradually replacing their brown plumage with white and black.

Distribution in the country and worldwide: The Egyptian Vulture summers in Palestine. They arrive in February/March and leave again in September/October, spending their winter in East Africa. Adult birds appear first wanting to settle on nesting sites and begin the process of courtship, mating and nest building. Juveniles and sub-adults from previous years will arrive later. Its distribution is often influenced greatly by the presence of cattle and rubbish dumps. Breeds around cliffs off the Dead sea and in the eastern slopes On migration can be seen everywhere in Palestine. Egyptian vultures nest in southern Europe and around the Mediterranean basin, North Africa and Central Asia, India and the Arabian Peninusla. Northern populations migrate and winter in sub-Saharan Africa while the southern population remains stable.

Habitat: The typical habitat of the Egyptian Vulture is open landscapes, especially in dry climates, though they can sometimes occur in the cold and rainy peripheral outskirts.

Behaviour: The Egyptian Vulture is always the last to scavenge from a carcass so it has evolved to feed from the meat-less skeleton, eating the bones and the marrow contained within using its thin beak to get between gaps. It has been seen in Palestine picking up Uromastyx lizards and tortoise and dropping them from a height. They are very much opportunists feeding on insects and other small animals, small carrion and garbage. Dozens of Egyptian Vulture can often be seen feeding on almost every rubbish dumps and landfill site throughout Palestine. The region now has a population less than ten pairs.

Breeding/mating (season, how and where): The Egyptian Vultures nest is usually well hidden in caves and dense rock cliffs up to 4,500 metres. The nest is built from sticks and twigs and lined with lamb’s wool, pieces of plastic and bone. They can lay up to three eggs and usually raise one or two chicks. Incubation is between 39-45 days and juveniles leave the net after 69-90 days.

Threats and hazards: Migrating to India and Africa to winter, all vultures including the Egyptian vulture are subject to poisoning from veterinary drugs used for cattle and also from purposely poisoned carcasses to stop giving away positions of poachers. Fatalities of vultures are also caused by birds flying into wind turbines and also being electrocuted by electricity wires.

Cool facts: A delicate bird that is beautifully sanctified by the Egyptian Pharaohs and appears in many of the murals found in the pyramids. The Egyptian Vulture is a very intelligent species using tools to crack open bones and eggs. As it is relatively small compared to the other vulture species it is usually pushed to the back of the feeding line when a carcass is found. Its patience and cleverness is always rewarded with the left overs from the rest of the scavenging group.