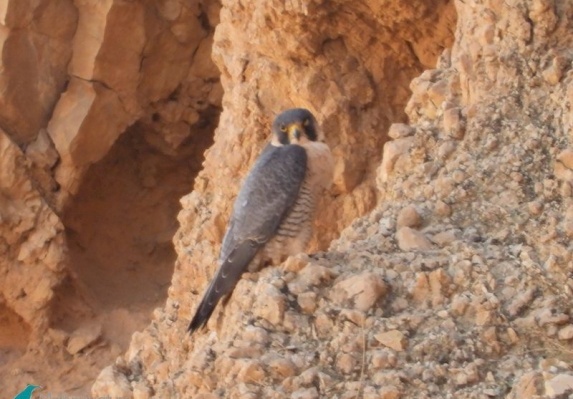 Distribution in the country and worldwide Very widely distributed around the world including Europe, most of Asia, north and south America and Australia. In Palestine – a scarce winter visitor throughout the west bank occurring October to April. In the past it could have possibly bred.

Habitat: A traditional bird of coastal estuaries, bogs and steep-sided cliffs. Nowadays, can be found more at home in cities breeding on tall buildings where there are good vantage points for hunting pigeons and gulls.

Identification (how does it look like): A medium to large bird of prey with a slate-grey upperside. Underside is white and barred heavily. Face is white but has a dark hood and moustachial stripe. A very strong flier with pointed wings. When soaring, it has a straight trailing edge to the wing.

Behaviour: Hunts favorite prey by either a dramatic stoop from a height or through a fast-paced low level chase.

Breeding/mating (season, how and where): Does not breed within Palestine but within Europe will lays eggs on the side of steep cliffs and on tall buildings.

Threats and hazards: Drastic decline due to biocides and persecution in the 1950’s and 1960’s. The population has recovered but still persecuted by certain groups.

Similar species not to be confuse with: The Hobby is smaller and has red feet. The kestrel has brown back and coverts and a longer tail.

Cool facts: The peregrine is the fastest bird in the world reaching speeds of over 200km/h in a death defying stoop when chasing after its favourite pigeon prey.