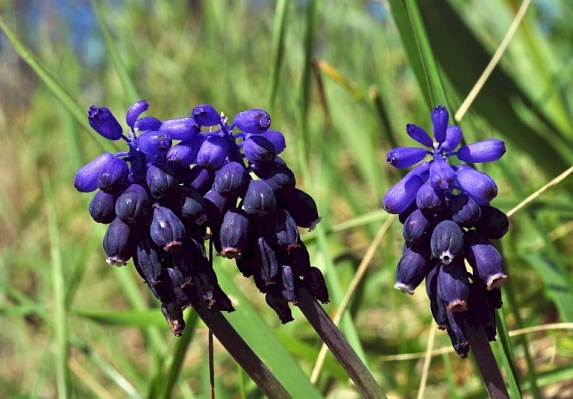 This plant species belongs to the botanical family Asparagaceae and it is commonly known as Dark grape hyacinth. Muscari commutatum is distributed in South Europe and Mediterranean region, but rare to very rare in most of its distribution, likewise in Palestine and wider area. This is a plant well adapted to desert and extreme desert climates, but it can also be found in woodlands, shrub lands and steppes.

Dark grape hyacinth blooms from December to March, in the warm and desert regions, while in South Europe it blooms from Mach to April. Muscari commutatum is a perennial herbaceous plant, which unbranched stems grow up to 30 cm high. The leaves are distributed in rosette, are linear, have parallel veins and entire margins. The flowers are held in dense raceme and have very dark purple/violet corolla, with six fused petals forming an elongate bell shape, ending up in a small constrict opening with six very small black lobes. This dark colour of the corolla and the black lobes are features that distinguish this plant species from other similar ones, e.g. M. neglectum. In such inflorescence there are sterile and fertile flowers together. The sterile flowers are brighter and smaller than the fertile ones. The fruits are green capsules that retain spherical-oval black seeds. 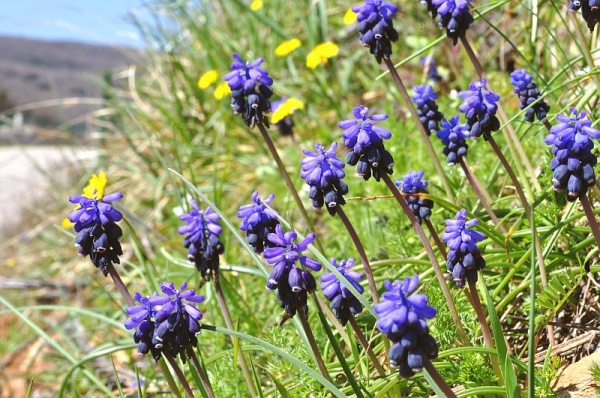