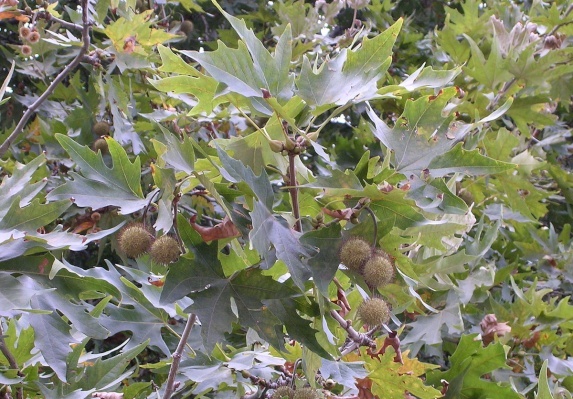 This deciduous tree species belongs to the botanical family Platanaceae. It is native to Eurasia, from the Balkans to at least Iran. Nowadays Platanus orientalis is very widespread ranging from the east Mediterranean throughout the Middle East to the south-east provinces of the Euro-Siberian region. Commonly known as Oriental plane tree, it grows better in humid habitats, riversides, Mediterranean woodlands and shrublands. Platanus orientalis is considered endangered in some parts of its range, due to the increased expansion of agriculture and the changing water courses for irrigation purposes.

This very large and wide tree can be up to 30 m tall, flowering from April to May. The broad and thick leaves are alternate on the stem, have palmate shape, with five emarginated lobes, measuring 8-24 cm long. The lobes are coarsely toothed and glabrous, with a 3-5 cm long petiole. In general this species has flacking bark, but when not flacking it becomes to be rugged and thick. The flowers are small, inconspicuous and green, whereas the fruits are round and burr like, in clusters of two to six on a stem. The pollination occurs by the wind.

Platanus (which encompasses eight species) is the unique living genus of Platanaceae family. Furthermore, Platanus orientalis is the unique plane tree species in Europe. This small genus is mostly used as ornamental trees (e.g. the traditional Persian Gardens), especially by roadsides and parks, since they provide shade and coolness during hot season. Its leaves are commonly known to have been used in concentrated aromatic liquids, herbal remedies and in Iranian traditional medicine to treat several disorders, such dermatological, gastrointestinal and inflammatory diseases. The timber is valuable for constructing furniture.