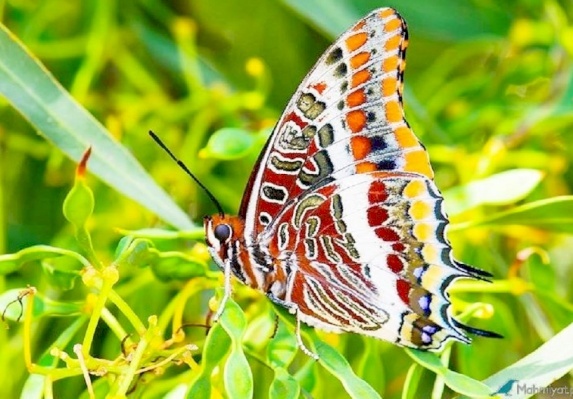 The largest of butterflies in this area, this member of the Nymphalidae family can trace its origins to the tropics. It can be found in the Mediterranean region and Africa. Its typical habitat in Europe is the Maquis shrubland, , up to 700–800 meters above sea level. In Africa it is found in savanna and thornbelt habitats. It is found in the Mediterranean woodland near wadis where its host plant, the eastern strawberry tree, is found, as well as on mountaintops. The adults feed on rotten fruit rather than nectar from flowers.

The males have  a wingspan of 40-42mm  whereas the wingspan of the females  ranges from 50-54 mm. This territorial buttrfly observes its territory from a lookout point. With its strong swift flight its approach induces intruders to take flight. Its wing strokes can be heard for tens of meters.

Charaxes jasius has two generations per year: the first in May–June and the second in August–September. After the second it spends the winter in the larval stage, until the next spring.

The uppersides of the wings are dark brown with orange margins. At the margin there is a chain of small orange spots. The hind wings have two short tails, characteristic of most species of the genus. Close to these tails there are a few blue markings. The underside of the wings is very colorful with reddish brown areas, numerous long black spots edged with white. The orange marginal band is also present on the undersides of the wings and it is preceded by a white band.

The female lays the eggs on the upper surface of the leaves of the Eastern Strawberry tree, Arbutus andrachne, laying no more than one egg per leaf. The egg is yellow and round, 1.5 mm diameter with a flat area at the head The caterpillar is green, cylindrical and has two yellow ocelli on the back. The head bears four horns facing backwards.

The chrysalis is suspended from a twig. A butterfly emerges from it after a period that can range from two weeks to one month.