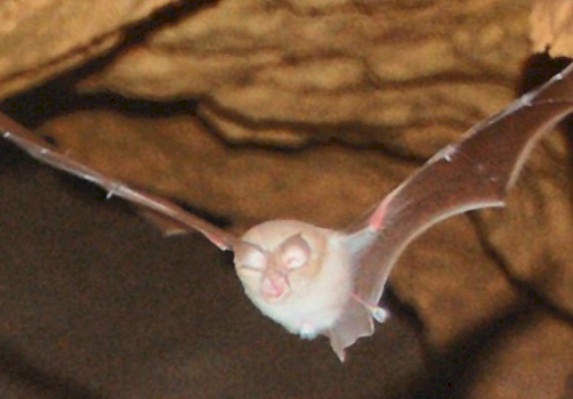 Picture Resource: By Carlosblh - Own work, CC BY 3.0, Link

Description – They are medium-sized, insect-eating bat. Its head and back are greyish-brown with a pale underside. Their wing membranes and ears are pale grey-brown. They have a distinctive horseshoe-shaped fold of skin that forms part of the nose and fleshy skin surrounds the nostrils. They have large ears without a tragus, a short tail, and small eyes which are often obscured by their nose. Their wings are broad, with rounded ends.

Distribution in the country and worldwide – It is a rare bat from the Mediterranean region of southern Europe, though it is also widespread in North Africa and western Asia.

Habitat – They prefer broad-leaved woodlands but can also be found in riparian areas, shrub lands, agricultural areas and valley bottoms up to 1,000 m high. During summer they roost in natural or artificial underground sites like attics, caves and mines, and in the winter in large caves.

Behavior – They have a fluttering, butterfly-like flight. They are gregarious in the winter with some colonies over 2,000 individuals. Summer colonies are small, only containing a few hundred individuals. They are solitary hunters and use echolocation to detect prey such as moths and beetles. It transmits sound through the horseshoe-shaped nose.

Breeding/mating (season, how and where) – They form large groups during the breeding season which occurs from mid-March to early June. The gestation period lasts about seven weeks, when the female gives birth to a single young. They are able to fly after around three weeks and become sexually mature at about two years.

Threats and hazards – Mediterranean Horseshoe Bats are at similar risks to other bats such as habitat loss, urbanization and farming. In particular, habitat fragmentation is a concern because they need continuous, linear features such as hedgerows to forage. Also, insecticides are particularly damaging to this species.

Cool facts – Females have two additional teat-like projections, known as “dummy teats” that the young bite during flight to hold the mother.