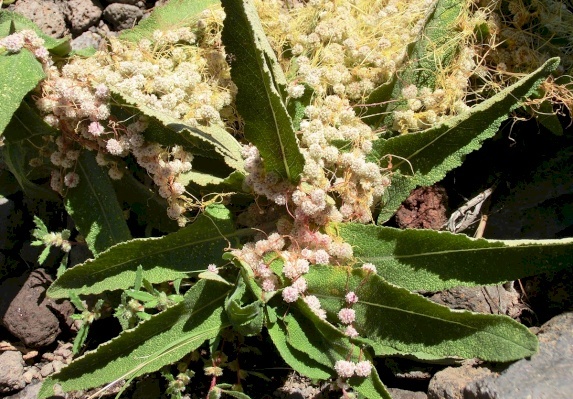 This plant species is a parasite herb that belongs to the family Convolvulaceae and is commonly known as Small-seed dodder. This species is native to the Mediterranean region but has become naturalised in several countries including Australia, the USA and many countries in Europe, Asia and Africa. Furthermore, Cuscuta planiflora is rare to very rare in most parts of Palestine and wider area.

Small-seed dodder is an annual plant, with twining and very slender stems that climb on a host plant. It has white little hermaphrodite flowers that bloom from January to May in Western Asia, but from March to July in South Europa. The petals are connate, forming very small flowers of up to 2, 5 mm size, which thus form compact knobs of 5 to 6 mm diameter. The corolla has lobes that are turgid at the apices. This plant shows no leaves and the fruits are round capsules containing seeds that are shorter than one millimetre.

An interesting point is that all plant species from the genus Cuscuta are parasites, meaning that C. planiflora do not have chlorophyll for photosynthesis, but take the essential nutrients from other plants by penetrating tissues of the host plant. This species parasitizes especially dwarf shrubs and annual plants, being a threat, for example, to Australian agriculture and a pest for lucerne plantations in the USA.
Despite the populations of small-seed dodder are decreasing, being rare to find, this plant has been used for the traditional medicine, in which the seeds of C. planiflora are used to treat osteoporosis, osteoarthritis and general muscular pains, as analgesic. Furthermore, in recent studies pharmacological investigation showed that C. planiflora possessed antidepressant, anticonvulsant, antibacterial, cytotoxic and hepatoprotective effects.