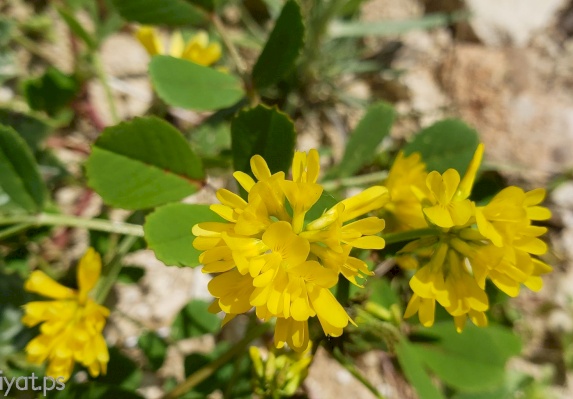 Medicago is a genus of flowering plants, commonly known as medick or burclover belongs to Fabaceae family. Medicago, from Medike, or medick, the Greek name for alfalfa, which came to Greece from Medea. It contains at least 87 species and is distributed mainly around the Mediterranean basin. Most members of the genus are low, creeping herbs, resembling clover, but with burs. The stem is erect, prostrate or ascending, branched at base, subquadrangular, hairless. Leaves are alternate, compound, trifoliate, dentate or serrate. Flowers are yellow, pea-like flowers, standard obovate, emarginate. Flowering periods in March and April. Fruits are Flattened, coiled pod. The plant is native to Europe, Central Asia, China, Japan, and North Africa. It is highly cultivated in Argentina, Australia and areas of the US in South America, especially in Chile.

The plant grows in Batha and Phrygana and in the cultivated fields, it belongs to the Euro-Siberian - Med - Irano-Turanian chorotype.

Members of the genus are known to produce bioactive compounds such as medicarpin (a flavonoid) and mediagenic acid which is a triterpenoid saponin. It is Beneficial for skin plagues, dysentery, rheumatic pains and wounds.

It is used as a green manure; it fixes atmospheric nitrogen. Leaves and young shoots are consumed raw or cooked as a potherb. Seed can be parched, ground into a powder and mixed with water to make a mush.

All classes of livestock, except horses and mules, eat it readily. Its use for sheep may raise problems because the prickly burs stick in the wool and can reduce its quality. In the Bolivian Andes, it has been used since the 16th century, for medicinal purposes, environmental uses, and animal feed.