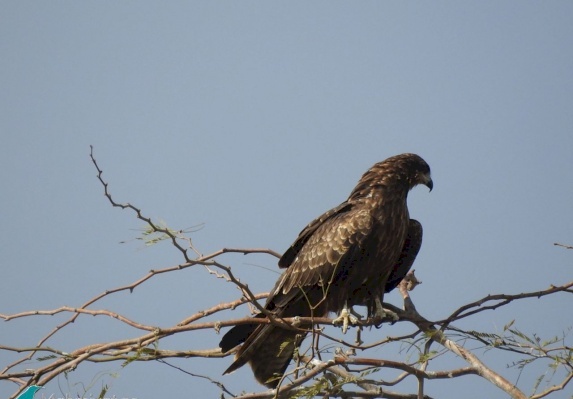 The Black Kite is in the Accipitridae family in the Accipitriforme order. It is 55-60 cm in size, 690-940 grams in weight and with a wingspan of 130-155 cm. The Black Kite is a uniformly dark brown bird with long and wide wings and a slightly forked tail. The legs have a wide cover of feathers on the upper legs (wide "trousers') and some of the birds may have dark "glasses" around the eyes. In flight the characteristic forked tail is visible mainly when the tail isn't spread. The under wing contour feathers are dark brown, the "fingers" are even darker, and the light colored inner flight feathers form a "window" near each wingtip. Females may have a slightly larger body than males and Juveniles are generally lighter in color with distinctive "windows" in their wings when in flight. Red kites are similar to the black kite but have a rusty coloration with a bright head and a deeper fork in the tail. The kites are known for their soaring and maneuvering with their tails. The black kite is usually found in open areas close to bodies of fresh water, but can occur in wetlands and woodlands. However, they have adapted to living near human environment and feed from the piles of garbage, one of their favorite "hang-outs". The black kites have no fear of humans and have been known to grab food from market stalls and from people's hands.  The black kite takes advantage of forest fires: attacking the confused, hurt, and exhausted animals that have lost their shelters. The kites will follow herds of locusts, and eat fish, mostly dead fish. Large flocks of thousands of black kites are known to meet in the evening and roost together. Forested areas near bodies of water are the natural habitat of the black kite in the breeding season (late March to early May). Until the 1950's black kites were known to breed in Northern Palestine. Agricultural methods used at that time apparently decimated that population through poisoning. Aside from central China, the Sahara, and areas of tundra, the black kite is found in all of the Eurasian area, Africa and Australia. It prefers a temperate climate, warm to tropic. It is probably the raptor with the largest worldwide population; which may be the reason there are yearly reports of mass mortalities due to secondary poisoning, water pollution and destruction of habitat  It has 3 main Subspecies: MIlvus migrans migrans : central and eastern Europe, the common subspecies in Palestine.  MIlvus migrans lineatus: Asian subspecies, solitary individuals may be seen migrating or wintering in Palestine. MIlvus migrans aegyptius: sometimes referred as Yellow-billed Kite. Mainly in Africa and Asia, very rarely seen in our area. The best area to observe the Kites in Palestine is around garbage dumps, mainly near Jenin. During migration it can be seen all around the country.