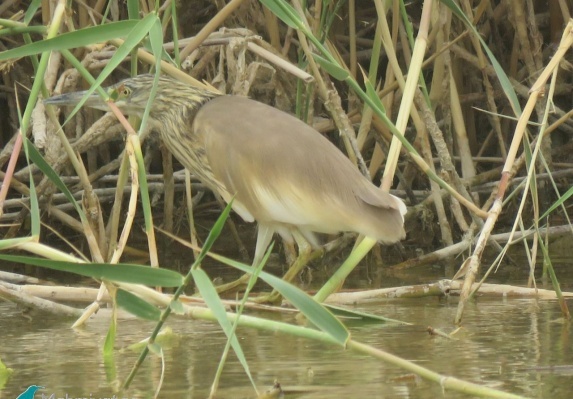 Description: A little heron with a sandy brown colouration. At rest birds look completely brown, but flight reveals pure white wings. In winter the neck has white and brown stripes with long plumes grown for the breeding season. The long bill is bluish with a black tip. Legs are yellowish-pink but are coral-red for a short period during courtship.

Distribution in the country and worldwide: The Squacco Heron is common in southern Europe in summer. Almost all its population migrates to Africa in winter.

In Palestine it is a common migrant and winter visitor. Although it is a scarce breeder, breeding pairs are more common in the Jenin area. The Squacco Heron sometimes mixes in other Heron's breeding colonies.

Habitat: The Squacco Heron can be found in marshes and around water. On migration they can also show up in fields.

Behaviour: The Squacco Heron feeds on fish and amphibians but if Dragonflies are around it will also hunt them. The hunting takes place from a hide and movements are sudden and fast. It will always prefer to use its camouflage rather than fly when danger is around.

Threats and hazards: The squacco heron population has had its ups and downs throughout history. During the 19th century the population was damaged as a result of wild hunting. The population in the 1950’s increased but the 1970’s saw a dramatic decline of the global population by 20%. Although it has now stabilized with time, the species is now threatened by destruction and re-managing of water bodies.

Cool facts: They are a very social bird, gathering at night to roost together. During the early morning they can be seen flying to their hunting grounds in a large flock where they will feed on insects and amphibians.