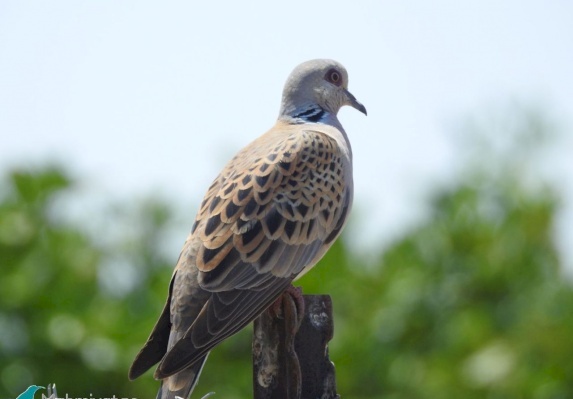 Physical characteristics Length: 25-28 cms. Weight: 85-170 grams Description The adult Doves have deep, chestnut colored feathers on their back and wings, with black spots in the center of each feather. This creates the tortoise shell effect that the bird is named for. On the sides of the neck are patches of thin black and white alternating stripes which are striking on a background of the lavender body. Around the eyes are rings of dark, red flesh.

Behavior: The Turtle Dove is the only long-distance migrant among the doves. It winters in Africa and returns to Europe and Asia in spring.

Habitat The Turtle Dove is common in open habitats such as fields, steppe with some trees, parks and urban areas. Vocalization With a soft, pleasant purr, the turtle dove "stakes his claim" to a territory. Breeding: The Turtle Dove nests in trees in woods, orchards, and in settlements. The nest is made of a few small branches and twigs placed in a fork in a branch of a tree. They lay 1 to 3 white eggs in March and April. Your young Doves gather in large frocks in fields around August and prepare themselves for the a

Distribution: The Turtle Dove breeds in an area from west Europe eastward to the Middle East, and Asia as far east as Kazakhstan. Despite a large worldwide population, the European population is dwindling quickly as a result of changes in agricultural practices and hunting in the Mediterranean area. In many European countries the turtle dove is considered to be endangered. Since the 1980's there has been a 78% decline in the population. The Turtle Dove is a common breeder in Palestine in all Mediterranean habitats. It is exceptionally common around Gaza. During migration the Doves can be seen also in the Jordan valley. Very rare in winter in the northern Jordan valley.