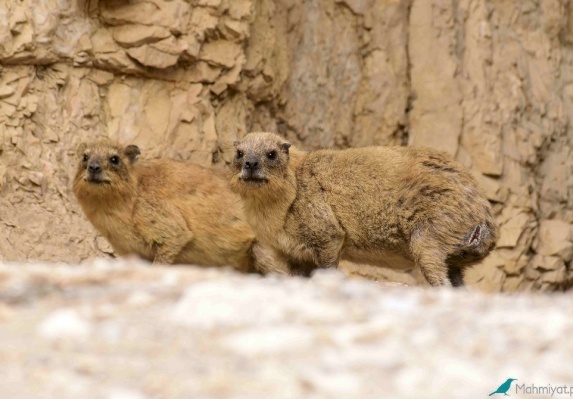 Description – A medium sized mammal, with a thick barrel-shaped body. Fur color is usually light brown, and in the middle of the back it has a yellowish white stripe. The toes are tipped with flattened nails, and the soles of the feet have thick rubbery pads that produce traction for walking on rocks. The two upper incisors are sharp and canine-shaped.

Distribution in the country and worldwide – Its origins are in Africa, south of the Sahara but had spread to the Middle East to Syria, Lebanon, Jordan, Sinai, Palestine and the Arabian Peninsula.

Habitat – Prefers areas of rocks and cliffs and can also be found in vicinity to humans.

Behavior – Active during the day and seeks shelter in rocky crevices at night. It is not active at times of intense heat or cold. In the morning hours and on cooler days they lie on rocks to warm their bodies. Towards the evening they again sprawl out on hot rocks. They are social animals, and form dense herds numbering up to 100 individuals divided to a few "harems" or families. In each family there is one dominant male, a few females, as well as their young. The dominant male often stands on prominent rocks, and announces its territory with scream type calls. It is herbivorous and adults need about 650 grams of grass, leaves and fruits per day. It feeds also on nightshades and Apocynaceae, perennials, Acacia and Jujube. In winter and spring they eat herbs and annual plants and in the summer and autumn they feed on leaves of trees and migrate following its food. They usually don't drink water.

Breeding/mating (season, how and where) – Mating occurs in July-August. As the mating season gets closer, the rivalry between the males in the group gets stronger. They fight exposing teeth and biting. The dominant male mates all the females in its flock. The rest of the males remain on the margins of the flock and join only when migrating. Calving occurs during March-April. Pregnancy lasts about 7.5 months and the female gives birth to 1-6 pups. The pups weight is about 200 grams, are born with fur, open eyes and ears and are able to walk and climb. At the age of 5-7 days, they start eating plants, at 3 months are weaned and at 16 months they reach sexual maturity. However, males can only acquire a "harem" and start reproducing when they are over 3.5 years old.

Weight and size – Average body length of 50-60cm. Weight is 2-4kg. Males are much larger than females and they can weight almost twice as much.

Threats and hazards – In areas where the population is very large, they are harmful to agricultural crops. They may also enter into the human settlements and damage plantations and gardens. The Hyrax is also a possible carrier of leishmania that can harm people. Therefore, humans sometimes hunt and poison them.

Cool facts – The Hyrax possess 29 vertebrae in their spine, a number that exceeds the number most mammals have, which gives them greater flexibility.