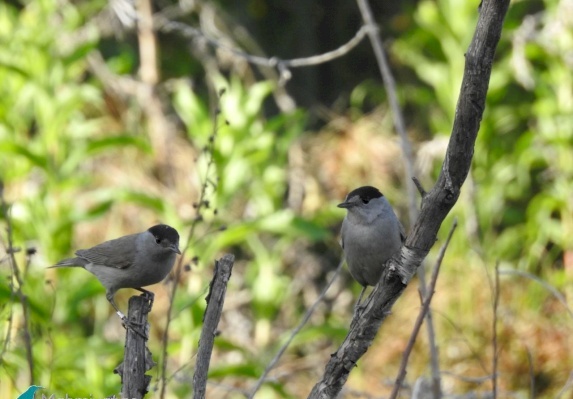 Systematic: The Blackcap belongs to the Sylviidae family in the Passeriformes order.

Distribution in Palestine: it's a common passage migrate and a scarce winterer. During the migration seasons we can expect hosts on both eucalyptus trees and callistemon; together with other warblers, such as Lesser Whitethroat. At autumn, many hunt for insects in mulberry trees, so they enjoy both fruits as well as the insects, along with the Lesser Whitethroat, Garden Warblers and Barred Warblers. Many individuals remain to winter in Palestine.

Identification: This warbler has a solid body structure, an "average plus" size. The male has a beautiful black cap, and the female has a brown one. Upper body is olive-grey and lighter grey lower parts. The tail is long, without white borders.

Behavior: It's active, bouncy and noisy - as opposed to typical "Sylvia" warblers.

Breeding: Male Blackcaps start singing before the females, especially in the spring; then they catch the best territories and attract females with their beautiful song, protrude their cap's feathers and shaking their wings. In many cases the male builds some "sketches" of nest, but the female will take the final decision, as well as the task of completing the construction.

Dangers and threats: In nesting areas a lot of Blackcaps are hunted down by Sparrowhawks. During the migration the Hobby take the Sparrowhawks' place.

Similar species not to confuse with: Garden warbler resemble Blackcap, but smaller with no cap. Arabian warbler has lighter under-parts, and the black patch on the head reaches under the eye and includes the cheek. Orphean Warbler also resembles a bit Blackcap, but it has white tail borders, white throat, and pale eyes.

Cool facts: During the spring, many individuals seen with yellow patches on their chests, and often misidentified. The reason for those patches is flower pollen.