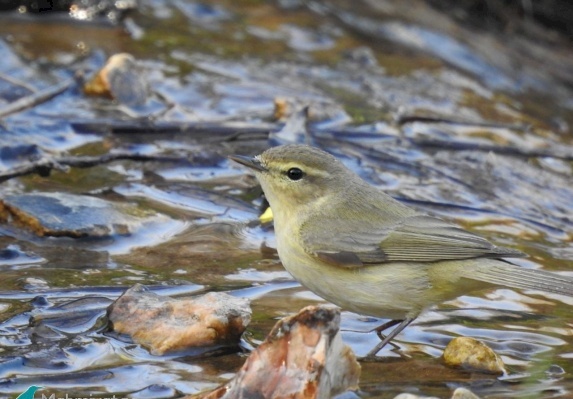 Systematic: The Chiffchaff belongs to the Sylviidae (Old World warblers) family in the Passeriformes order.

The Chiffchaff is a very small songbird and a common warbler that lives in the forests and gardens of Europe and Asia. It is grey – green with yellow hue to upper parts and sandy white underparts. Whitish supersilium gives it a "serious" look and the legs are dark, often with yellowish feet. The bill is straight and slender and the wing is quite short.

Habitat: The Chiffchaff is common in forests of mostly tall trees, but also found in thickets, urban parks and gardens. On migration it can be found in every habitat with trees or bushes and around wetlands.

Distribution and population trends: Found throughout most of Europe and Asia. From eastern Siberia to northern Africa and the Middle East. Most of the population occurs in southern and Eastern Europe, the Mediterranean, South Asia and North Africa. The winter is spent in southern Europe, Middle East and sub-Saharan Africa.

In Palestine: Quite common in winter throughout the country. It arrives in October and leaves in April. It is also a very common migrant, mainly in the first half of March and October, when it can be seen in every possible habitat, including the desert. It is most common around wetlands or wet fields with hedges.

Behavior: This small insectivorous bird is foraging while hoping on the undergrowth or on the outer ream of trees and bushes. On migration it can change its diet to pollen and fruits for the sugar. The Chiffchaff is a highly territorial bird who would attack any competitor, even if it is 3 times bigger. It declares its territory through song also on the wintering grounds and even during migration.

Similar species not to confuse with: The Willow Warbler is a longer bird with longer primary projection and lighter colored legs. Its head is also more pointed and it has a longer two toned call. The Eastern Olivaceous Warbler is much greyer and has a less compact look.

Hazards and risks: The Chiffchaff is subject to cat's healthy appetite. In southern Europe it is sometimes being trapped by lime sticks and mist nets too, but the prime hazard is habitat destruction.

Cool facts In Palestine one can observe all the subspecies of Chiffchaffs in its range. The Collybita is greenish and rounded and comes from western and central Europe, abietinus has a more olive green look and a longer head, brevirpes is greyer and smaller and comes from Turkey and Tristis is almost totally grey and arrives in late November from Siberia.