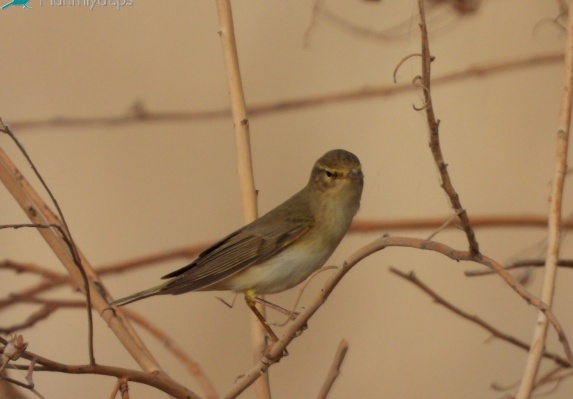 Systematic: The Willow Warbler belongs to the Sylviidae (Old World warblers) family in the Passeriformes order.

The Willow Warbler is a very small songbird who migrates great distances. Its appearance is quite dull with grayish brown-green upperparts and a pale supercilium. The throat and breast have a yellowish-white hue. Legs are usually pink, but can be grayish and the bill is slender. The wing of the Willow Warbler is proportionally long and enables it to migrate so far. The young birds are yellower in autumn.

Distribution: The Willow Warbler is widespread across all of the northern parts of Europe and Asia and winters in Africa, down to South Africa. In Palestine it is a very common migrant in early autumn (September) and is quite common in late spring. It does not breed or winter in our area.

Habitat: The Willow Warbler lives in open woodlands. The most important trees for this species are birch, alder, and willow habitats. On migration it can appear almost in any habitat with trees.

Behavior: The Willow warbler is highly migratory and travels tens of thousands of Km's every year through mountains, deserts and sometimes seas. It likes to feed on the outer part of the tree and on the undergrowth. The nest is usually built in close contact with the ground, often in low vegetation. Eats small insects, galls, and pollen.

Similar species not to confuse with: The Chiffchaff looks almost identical but its legs are darker, the head shape is rounder and it has a different call and song. The primary projection (and wing length) of the Chiffchaff is also shorter.

Cool facts The Willow Warbler is a very common bird worldwide. It is most common in Scandinavia with around 24 million pairs. The population is declining in England due to oak deforestation. Some of the Warblers that can be seen on migration in Palestine come from as far as east Siberia and travel as south as South Africa. ,