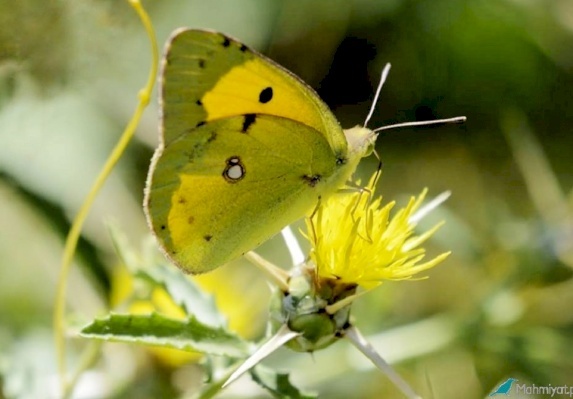 Commonly known as the Clouded Yellow, these small-sized yellow coloured butterflies is widely distributed across its range from North Africa and southern Europe to the Middle-east. It is mostly found in areas of open vegetation with lots of flowering plants in the Mediterranean region but not in higher altitudes.
In  Palestine, 3 species are known to occur – C. libanotica, C. croceus and C. erate
However recent molecular studies have indicated that there could have been a misidentification as C. erate was recorded in Lebanon and Cyprus and could have been C. croceus.
The adult butterflies are golden to orange-yellow coloured on the upper-side of the wings with a broad black margin and a black spot at the centre of the forewing. The underside of the wings is greenish yellow, without the black border and there is a while coloured spot at the centre of the hindwings. The underside of the forewings have the same black spot as on the upperside but this spot is lighter in shade. The males and females have distinct appearences which is easy to identify – the females have bright yellow spots along the black borders on the upperside of both the wings. While at rest, they always keep their wings folded up or closed which makes the distinction between male and female difficult. Otherwise while in flight they can be very clearly identified by their distinct bright yellow colouring.
This species has several generations or broods that fly all round the year.
The food-plants of this butterfly species belong to the family Faboideae and the eggs are laid singly on the leaves of the host-plant. The larvae are green coloured with black spots all over the body. Different colour forms of this butterfly species can be seen within the same location and when they migrate in large groups, such periods are often referred to as the ‘clouded yellow years’ !!

Sightings: This species is widely distributed across its range from North Africa and southern Europe to the Middle-east. In Palestine it is present year round.