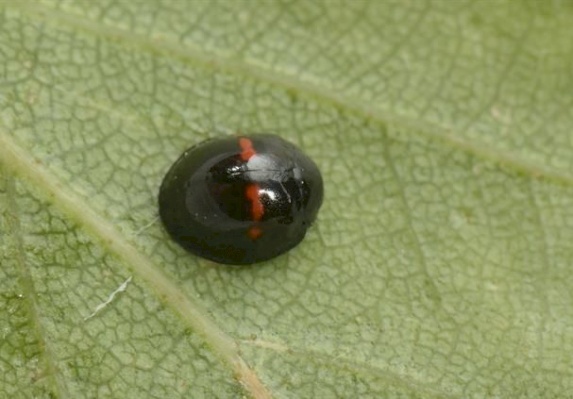 This is a beetle species of the ladybird´s family (Coccinellidae). They are commonly called heather ladybird and are widely distributed in Europe, North Africa and Western Asia, being native in Europe and the Middle East. Chilocorus bipustulatus can also be easily found in the citrus groves of Palestine area. This small beetle is shining brown coloured with two reddish-orange spots on their elytra. Hence the Latin word bipustulatus, meaning two-blistered. Sometimes three spots run in a horizontal line and join into two larger spots or a single bumpy line.

Chilocorus bipustulatus is very small, measuring between 2,7 to 4 mm long. They can be black or brown. In temperate countries, the adult beetle is active from May to October and overwinters as an adult.

Heather ladybirds feed mainly on aphids, scale insects and on other small insects, such Saissetia oleae, Aspidiotus nerii, Chionaspis salicis, Chrysomphalus aonidum, Pseudaulacaspis pentagona, Planococcus citri. Since aphids and some of these other insect species can be pests for plants, heather ladybirds have been introduced worldwide as biological control agents.

The larvae of Homalotylus eytelweini and Tetrastichus coccinellae are endoparasitoids of the heather ladybird, when this is still in larva phase. Another threat is the larvae of Phalacrotophora fasciata, an endoparasitoid of newly formed pupa of Chilocorus bipustulatus.