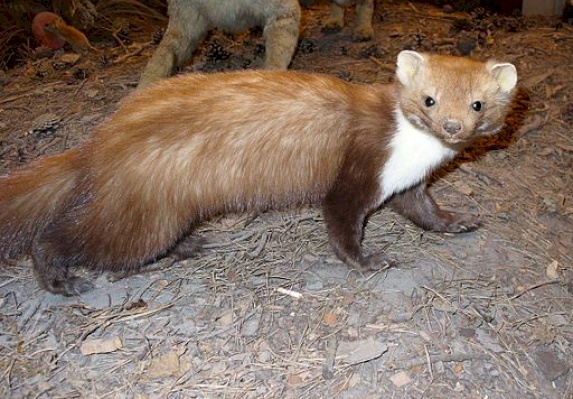 The beech marten belongs to the mustelidae family in the carnivora order. It is a small predator (1-1.5 kg), with brown hair covering all of its body and a cream-white chest that is unique to each individual and can be used for recognition. The tail is a little darker than the rest of the body and is thick and puffy. The beech marten has a unique look that separates it from most of the same size mammals can be found in the region.The beech marten is nocturnal in our region but in other places in its geographical range can be also active during the day (in Europe and central Asia), a carnivore that eats small mammals, rodents and birds and can also feast on large invertebrates. It is also not rare to find fruit in its diet. Usually it is found in forested areas but can also be seen in rocky open habitats around the Mediterranean regions. In Europe and Russia it can also be found in urban and rural villages, having their home in attics and old barns.During the 1950's and 60's the population was in decrease but since then it has recovered and today they seem to be under no threat and even being a cause for ecological pressure over some vertebrates under threat.The geographical range goes from western Europe to china and Mongolia and also the northern middle-east.