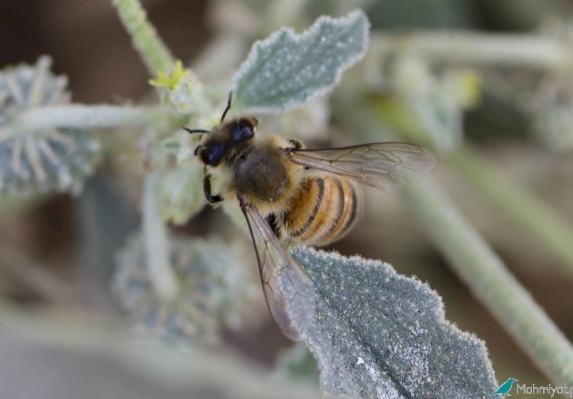 Apis mellifera is the commonly known honey bee, which comprises more than 20 subspecies (races) around the world. Despite, all races are cross-fertile, commercial breeding and reproductive adaptations may make interbreeding dubious. Apis mellifera syriaca is a honey bee race popularly known as the honey bee of the eastern Mediterranean, distributed in the regions of Syria, Lebanon, Jordan, Palestine and wider area. A. m. syriaca is highly endangered in Palestine due to the frequent import of other races colonies for commercial purposes. The introduction of other honey bee races leads to competition with the native race and to interbreeding.

Apis mellifera syriaca is the smallest of the eastern honey bees. Furthermore, this race is characterized by a peaked abdomen with yellow stripes on the first three dorsal abdominal segments and a bright yellow scutellum. This race is also the most south-western of the near-east honey bee races. However, due to continued importations of commercial breeder lines and their use in honey production, this original pure bee subspecies is rare and nearly disappearing over time. Thereby, already in 1952 it was confirmed that the frequent importation of other honey bee race, Apis melifera ligustica, into Palestine and wider area was making more difficult to find pure A. m. syriaca in these areas. This tendency has increased and was improved by the introduction of other successful breeder lines including strains of other origins. This resulted in cross-mating of local original populations of A. m. syriaca with other breeder lines, occurring different degrees of genetic blending with diverse commercial characteristics and the almost loss of the savage race.

The almost total replacement of A. m. syriaca populations by the beekeepers seem to have a couple of reasons: A. m. syriaca is not easy to handle, since this is considered an aggressive bee race, which remarkably defences their colony and are often swarming, whilst commercial strains have been selected for being easier to handle and to maintain. Nevertheless, this race has also notable advantages, such as its good adaptations to dry and hot climates, which allow them to survive extreme temperatures in summer. Furthermore, this subspecies has the ability to lay eggs according to pollen availability and honey flow. Another very interesting adaptation strategy of A. m. syriaca is that it can resist better the attacks from Vespa orientalis, a big body wasp species known as a predator of honey bees. In addition, keeping A. m syriaca does not need special care for maintenance, compared to imported pure subspecies that are not adapted to the local conditions and natural enemies.