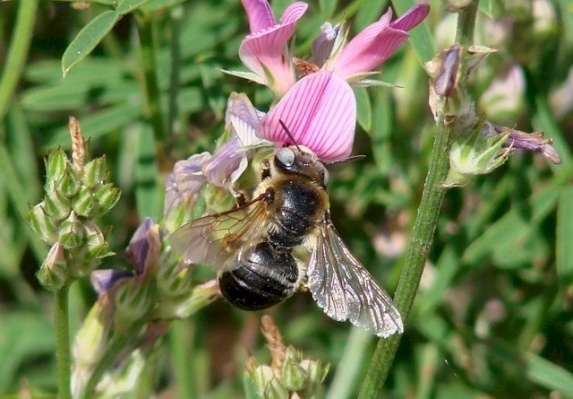 Melitturga spp. (= species of the genus Melitturga)– Family Andrenidae The genus Melitturga is restricted to the Old World, where the only 17 existing species inhabit mainly southern steppes. A total of four species were found in southern Africa, spread to North Africa and from there across the Iberian Peninsula and central Europe to West and East Asia. There are only three species of this genus found in Palestine and wider area: Melitturga krausi, M. spinosa and M.syriaca. A new species was recently described, Melitturga krausi, which is rare and only found (endemic) in Palestine wider area. Melitturga spp. are commonly known as hovering bees, because the males (drones) have markedly big blue eyes, combined with their fly style that look very similar to hover flies.

With a relatively big body size measuring 13-16 mm, female hovering bees look like Andrena spp., but some species such Melitturga clavicornis differ clearly from Andrena species, since the first has yellow clypeus and poorly developed hairs on their hind tibia (scopa). In addition, the big blue eyes of the drones are a distinctive characteristic of Melitturga spp.

Like Andrena spp., Melitturga females build their nest in mostly flat, sparsely vegetated ground. They are solitary bees, but they can occasionally be communal, when up to two females work together in one nest. Each single female digs first a five to 35 cm deep main course and then several horizontal or inclined short side passages, each leading to a brood cell and backfilled, after their closure, with earth. The main threat to Melitturga spp. nests is the parasitic bee Ammobatoides abdominalis.

The females of Melitturga species have a particularly interesting way to carry the collected pollen to their brood cells: the pollen is mixed with nectar and placed around their hind tibia in a shape of a ring. This happens due to the short length of their scopa hairs, so they cannot collect pollen the same way the other bees with scopa do. Furthermore, Melitturga spp. have one generation per year (univoltine) and fly from June to August.

Curiously, males hovering bees monitor in flight the nests with their unusual eyes, searching for the first opportunity to reach a newly hatched female for mating. In these moments, because of their way to fly, males Melitturga can be easily confounded with hover flies. Another interesting behaviour of the males is that usually they bite on plant stem, fixing themselves on it for sleeping. This often happens in groups, forming a nice Melitturga male’s dormitory.