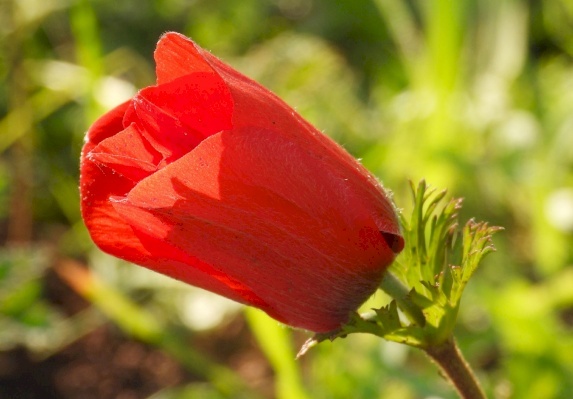 The poppy anemone is a perennial plant, 20-40 cm tall, with a tuber and deeply lobed leaves. It belongs to the Ranunculaceae family.

The flowers are large and showy, with five or more petals colored red, white, pink or violet, and a black centre rich in pollen.

Poppy anemones are common in sunlit areas throughout most of Palestine, and often create dazzling red carpets seen from afar. Flowering occurs from January to March, peaking in February. Anemones thrive in grazed environments, where they experience less competition for light from other plant species.

The red flower variety is the most drought-resistant and hence the most common, whereas other color variants can be found mostly in northern and mountainous populations  growing on lime-poor soils. A single anemone flower blooms for more than week. During the course of bloom, the flower gradually grows in size and its stem further elongates; additionally, the flower changes its position along the day, constantly facing  the sun. At the end of bloom, the petals fall off and the mature seeds, surrounded by a cottony fluff, remain on the elongate stalk and are gradually dispersed by the wind.

Poppy anemone flowers produce copious amounts of pollen but no nectar, and are pollinated by a large variety of insects, including beetles, bees and flies. Red anemone flowers further attract a special type of beetles called bumble bee scarab beetles (family Glaphyridae), which are one of the few insect groups that can detect red color in their vision.

The Arabic name of the plant, Shaqa'iq An-Naa'man, meaning 'the wounds of Naa'man', may be derived from the Canaanite god of spring bearing this name.