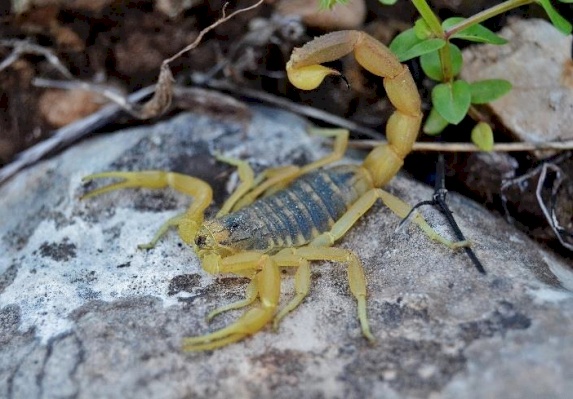 The Deathstalker scorpion belongs to the Buthidae family in the Scorpiones (scorpions) order, of the Arachnida (arachnids) class. The Deathstalker is considered as one of the most common scorpions in its distribution areas as well as in Palestine. The Deathstalker (a common name which often referred to the  other species of the genus Leiurus as well) is and an average to big sized scorpion (relatively to the local fauna), which may reach up to 95mm, with an average size of about 60mm. It is considered as of the most abundant, as well as most venomous scorpion species in Palestine, and known to be one of the world's most venomous scorpion species as well. Even though, death cases are rare and there is an antivenom in presence. The species can be easily identified by its overall yellow coloration, grey tergites (the dorsal segments), slender pedipalps ("pincers") and 5th metasomal (often mistaken as a "tail") segment, which is darker than the others in most of the cases, and its color that varies from greyish-yellow to complete black (which appears mainly in juveniles).  Another unique recognition feature is the five-crested tergites, which are the first and the second ones. The other tergites have three main crests only. Its former scientific name (before it was elevated to species rank – L.quinquestriatus hebraeus) was derived from the fact that it shows the five-crested tergites: quinquestriatus – "quinque" stands for five, and "striata" stands for crests. Its diet, as many other scorpions species, is based on small invertebrates. This scorpion species tends to sting readily when disturbed, and well known for being hot tempered. The Deathstalkers will generally act with "hit and run" reaction – they sting and run for shelter when feel threatened; in some cases, they might stay in a single place and sting repeatedly, if kept being disturbed. The Deathstalker (Leiurus hebraeus) is distributed in Asia: Arabian Peninsula, Sinai Peninsula, Palestine, Jordan and parts of Syria. The species L.quinquestriatus, which is a relative of this species (those were considered to be two subspecies), distributed over North Africa.

Conservation status – not evaluated by the IUCN. As for it being widely distributed and abundant, it would probably fall into the criteria of a least concern (LC) species.

In Palestine – Common in all habitats from the Mediterranean to the arid ("desert") habitats, excluding heavy soils and sand dunes.