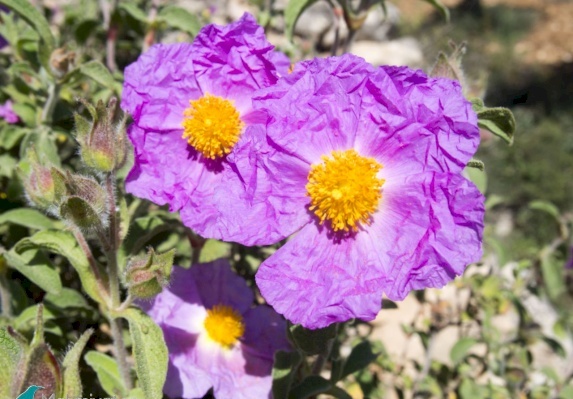 The rockroses are evergreen shrubs bearing large showy flowers, that are native to the Mediterranean Basin. They belong to the Cistaceae family. Two species appear in Palestine: the sage-leaved rockrose (Cistus salviifolius L.), which has white flowers, and the pink rockrose (Cistus creticus L.), which has pink flowers. The rockroses flower between March and June, and bear five large petals, and a yellow center with many stamens. A single flower opens in the morning and wilts by the end of the same day. The flowers produce copious pollen but only little nectar. They are frequently visited by honey bees, bumble bees and small "sweat" bees, as well as flower beetles, which forage on the pollen. Occasionally one may spot a butterfly collecting some nectar. The fruits are small hard capsules, containing many small seeds. The fruit of the sage-leaved rockrose is hairless and pentagonal, while the fruit of the pink rockrose is hairy and round. The rockrose is common in the western, Mediterranean part of Palestine. It grows in open, sunny habitats mostly on chalky and marly soils, and becomes especially dominant in recently burnt landscapes, as the fire induces mass germination of seeds, creating dense rockrose stands. Several species of rockroses produce aromatic resins that have been used in the production of perfumes and incense. An infusion from the plant's leaves has also been used in traditional medicine.