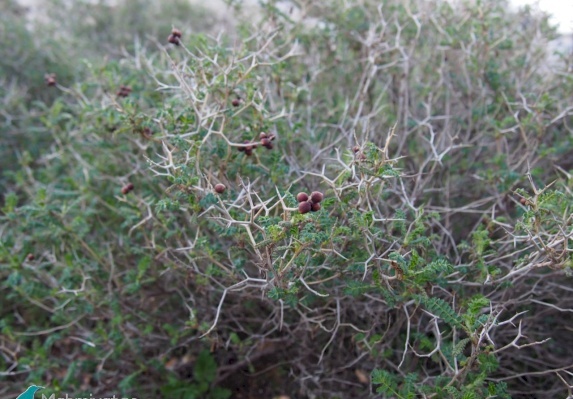 The prickly burnet is a short, dense and branched, spiny dwarf-shrub, 30-40 cm tall, belonging to the rose family. The leaves are divided and elongate; the winter leaves are larger and softer than the summer leaves. The flowers appear between January and April. Unlike the other familiar members of the Rosaceae family, the burnet has separate male and female flowers, both of which are tiny and unattractive, and are pollinated by the wind. The female flowers develop into red, small round berries that eventually fall to the ground. The prickly burnet is distributed along the eastern Mediterranean Basin, reaching Italy and Tunisia in the west. It grows on limy soils throughout the Mediterranean and semi-arid regions of Palestine. Due to its spines, it is resistant to grazing. It is the most common dwarf shrub in Palestine, and prevails throughout the country, except in the Jordan and Dead Sea Valley. It is the most important member of the batha semi-shrub plant community, often dominating the landscape. The traditional uses of this common plant are numerous. The branches have been used to make fences, sheep pens and brooms. The roots have been used as a medicine for the treatment of diabetes, toothaches, digestive problems, inflammation and pain. The entire plant is also commonly used as a fuel.