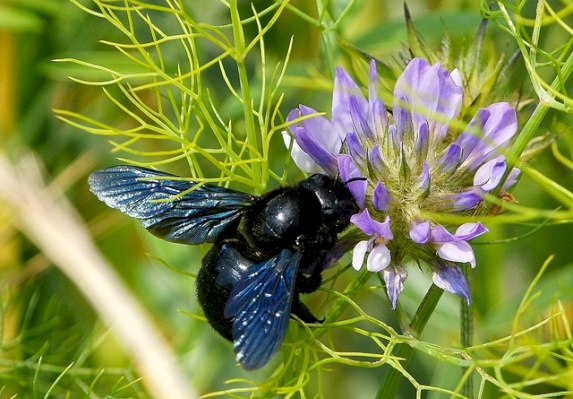 (highlight: Xylocopa sulcatipes) Xylocopa spp. This is a large genus of bees from the subfamily Xylocopinae, distributed worldwide, but mainly in tropical and semitropical regions. All Xylocopa species are commonly known as carpenter bees, because of their nesting behaviour: they nest in hard wood, burrowing holes especially on dead wood or bamboo. Therefore, these bees have powerful mandible structures. Exceptions are the species of the subgenus Proxylocopa, who dig nests tunnels in soil.

Xylocopa includes 372 species in 35 subgenera worldwide, from which eight species are found in Palestine and wider area. These robust bees are 13 to 30 mm long. Females are dark coloured, mostly black. Some have yellow hairs on the top of the abdomen, some have orange and some have even bright blue hairs. In turn, despite the similar body size, males are a striking contrast to females because they are usually totally yellow, or pale in some species or even totally bright golden with (or without) black stripes on the abdomen.

Species of Xylocopa are not eusocial (true social), however they can show a semisocial behaviour. This level of sociality does not form big colonies and has no queens. However, there is a tendency towards social behaviour, were two or more adults are frequently found in nests. Although one to several young adults commonly are present in a nest with the old mother, only a minority of nests in most species contain two or more older bees, with division of labour and semisocial relationships. There are reports of some species that storage food for adult consumption, a practice common in social bees.

An unusual curious feature of most male Xylocopa, not known in any other bees, is a large gland opening on the top of the thorax. It seems that the product of this gland plays a role in courtship.