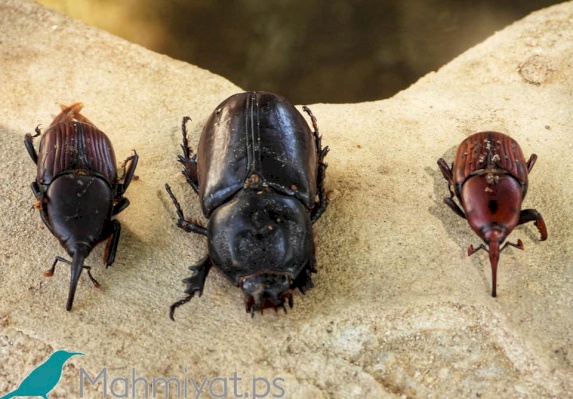 The Mahmiyat.ps website revealed that the Jordan Valley area, in the West Bank, was exposed to the red palm weevil. This is considered one of the most deadly insects in palm trees of all kinds and causes slow death to the trees.

In a press release issued today, the site explained that this insect reaches a length of 4 cm and has the ability to fly for several kilometers. This helps the weevil spread among multiple agricultural fields. It is called “the hidden enemy”, because of the real danger it poses to palm farmers around the world.

Mahmiyat.ps called upon the farmers to cooperate with coordinating authorities to fight the insect. First, the farmers must enact agricultural quarantines. Then they must commit not to transfer palms and palm seedlings from affected areas to areas free from infection. They must also clean their farms from weeds and remove cut and existing stems left on the farm. This has to happen until there is no viable shelter left for palm weevil.

The site indicated that overseeing the irrigation process for palm trees contributes to controlling the situation, because excess moisture creates a desirable environment for the insect. In addition, there is a necessity to use other means, such as using light traps and burning then removing infected trees.

It is noteworthy that the red palm weevil was discovered in the Gulf region in the mid-eighties of the last century. Since then, the weevil’s reach expanded significantly in various countries all over the world. It is a trans-boundary and dangerous pest of date palms, coconuts and ornamental palms. Its origins go back to the countries of South and Southeast Asia.

It is classified as one of the main invasive pests that annually infect about 40 species of palm trees around the world and cause great damage to them. The pests negatively affect production, farmers' livelihoods and the environment.