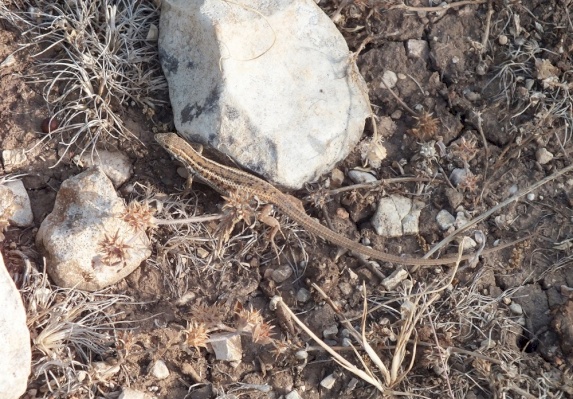 The Snake-eyed Lizard belongs to the Lacertidae family in the Sauria (lizards) sub-order of the order Squamata (scaled reptiles). It is one of several lacertid lizard species present in Palestine, reaching a maximum total length (body + tail) of 21 cm. The Snake-eyed Lizard is usually well camouflaged, matching the background of its natural surroundings. There is variation in the coloration between the sexes, adult males having more prominent markings as well as being larger than the females. Its name is derived from the fact that it lacks eyelids, its eyes are covered by transparent scales, as are the eyes of snakes. The tail is very long (unless it has been broken or regenerated), hinting that this lizard is very swift moving - as is indeed the case. The Snake-eyed Lizard is an excellent climber, and when escaping danger quickly jumps on and runs on branches of shrubs, rocks and soil. Where the species is present, they are very active and abundant on sunny days and may be seen in dozens. They are active during the day (diurnal). The diet of the Snake-eyed Lizard consists of invertebrates, mainly insects. It is oviparous (the young hatch from eggs), hatchlings usually appear during late summer and early autumn. The Snake-eyed Lizard inhabits southeastern Europe, Turkey and parts of the Middle East.